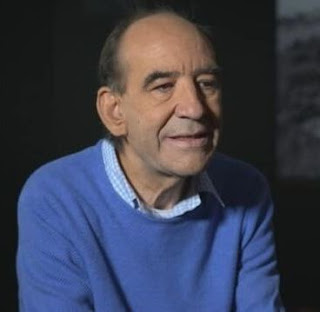 Now and again you run into people who help restore your faith in humanity with their quiet dedication to making the world a better place.  Salustiano Gutierrez, who succumbed to cancer last Saturday aged just 58, was one of those people.
Born and raised in Granada, Salus came to the nearby town of Benalup-Casas Viejas in 1992 to teach at the new secondary school. He hadn't intended to stay long but soon became deeply involved with the town and its people. He was inspired by the American social anthropologist Jerome Mintz, who lived in the town for several years in the 1960s and 70s, studying the minutiae of daily life in Benalup and the surrounding villages. Salus took up the baton and continued researching the town's history and culture.  He published his findings on a blog which he set up in 2007, Desde la historia de Casas Viejas.  The blog also includes many photos and film clips made by Mintz which give a unique insight into the daily life of past decades. Salus continued to post until days before his death, eager to complete a series on the origins of local words.
Salus believed strongly in society and personal commitment to the community to which one belongs.  Swimming against the rising tide of individualism, he used his teaching to pass on his values to the younger generation.  He always believed that teaching was about much more than the transmission of knowledge or a way of earning professional status, it was a responsibility and a privilege.  Following his death, his Facebook page received dozens of messages from former students expressing their gratitude for his role in shaping their lives.
In 2017 Salus published a book about an event which took place in Benalup in January 1933, when a workers' uprising was brutally put down by the authorities, leaving 24 dead.  Los Sucesos de Casas Viejas - Crónica de una derrota (The Events of Casas Viejas - Chronicle of a defeat) includes personal interviews and a comprehensive photographic record of this grim episode. Like all those dedicated to bringing to light the atrocities of Spain's past after years of deliberate amnesia, he made some enemies. But in his own words, "It was necessary to make a record of social history, to put a face to the protagonists of this social movement". Today Benalup-Casas Viejas has come to terms with its past and there is an interpretation centre, a monument and a street-tour of places related to the events of 1933.
Salus was actively involved in the cultural and social life of the town, participating in its famous Carnival, and a regular visitor to its local bars.  He loved a good debate, and was greatly respected for his even-handedness and courtesy towards people of all classes and opinions.

A few weeks ago Salustiano was presented with an honorary medal by the Town Hall, something he had previously declined.  In his acceptance speech he declared:

... I want to end by emphasising how Benalup-Casas Viejas has allowed me to go deeper into its history, into that spider's web that has trapped me and given meaning to my life. I am totally convinced that in other places they would not have allowed me to do this. For this reason the award is not about whether I deserve recognition for doing what I love, it is a gift that I appreciate and value, from the people of Benalup-Casas Viejas who have my eternal and infinite gratitude.

The people of Benalup will surely return that eternal gratitude.

Salustiano Gutierrez leaves behind his beloved partner Juani and their two children, who earlier this week cast his ashes over the hills of his adopted homeland.