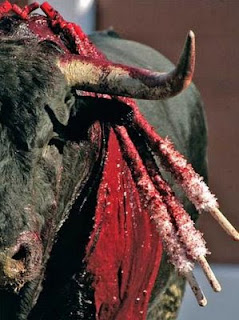 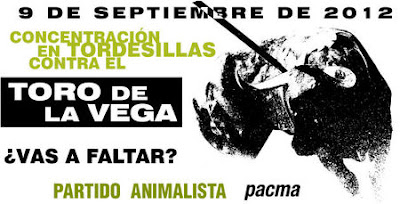 Last week, coinciding with the 8th Festival Internacional de Música, Alcalá had its first Paseo de Galerías. It was organised jointly by the Town Hall and the Painting in Spain art school. Local artists and craftsmen from all over the region of La Janda were invited to display their works in bars, restaurants and empty shops around the town, for the public to drop in, enjoy a drink and  tapas, and hopefully purchase a painting or two.

Despite taking place in one of the hottest Augusts on record, and the failure of some of the participants to show up, the event was reasonably successful with several paintings sold, and was enjoyed by locals as well as visitors.

Here are some of the exhibits.

Watercolours by Benito García Morán on the Calle Real: 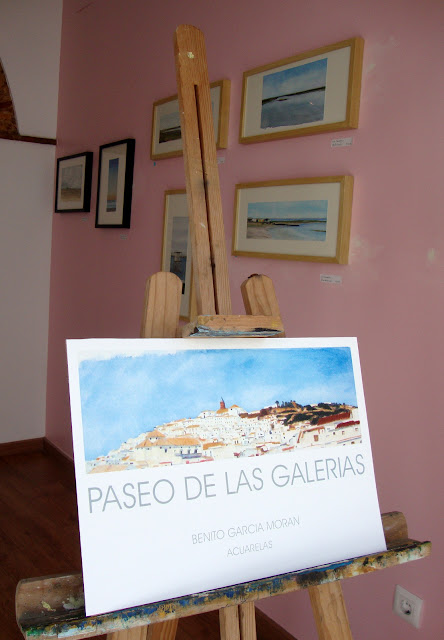 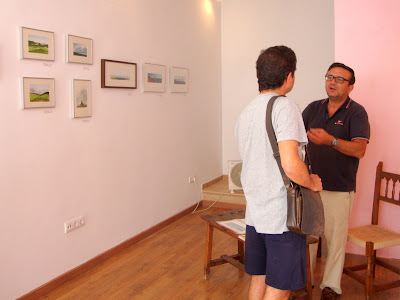 Acrylics by yours truly in the Peña Madridista (Real Madrid supporters club), hanging amongst the Cristiano Ronaldo shirts and trophy posters: 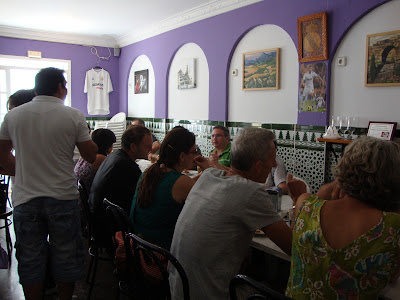 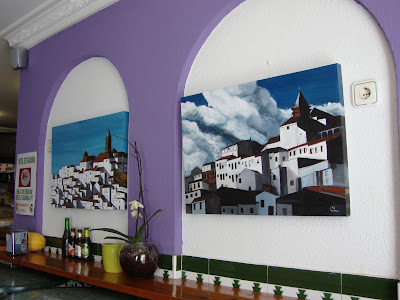 Oils by María Gómez in the San Jorge Hotel: 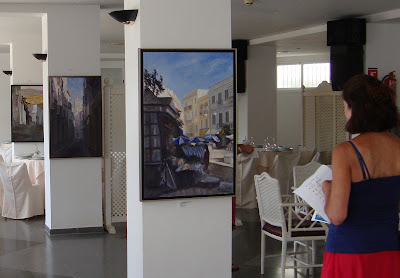 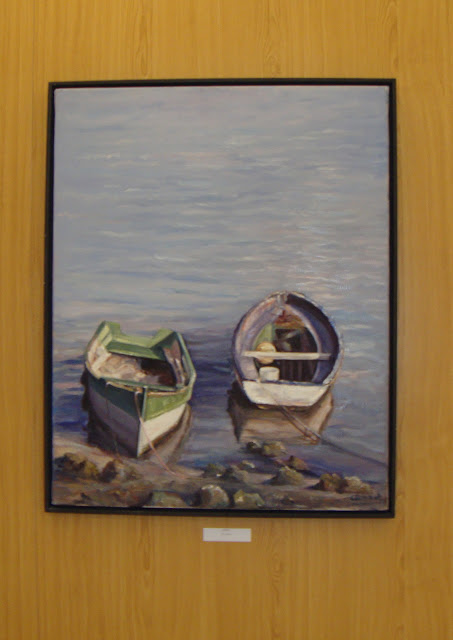 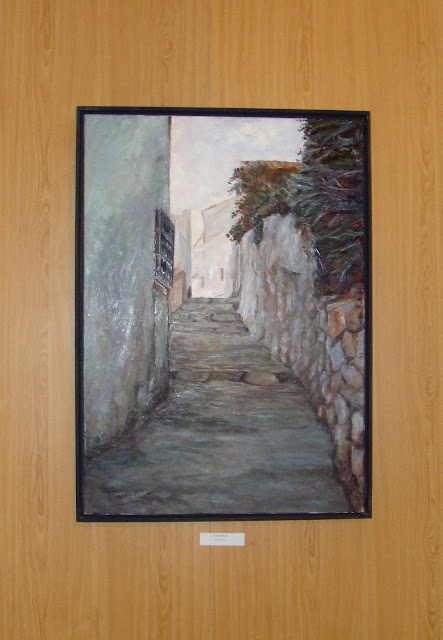 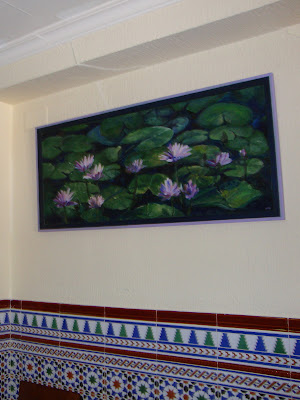 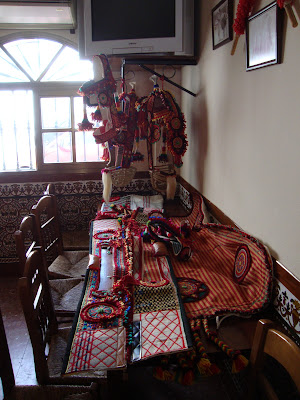 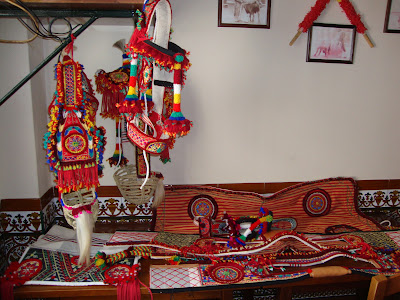 Oils by Manuel Rey Pulestán on the Alameda: 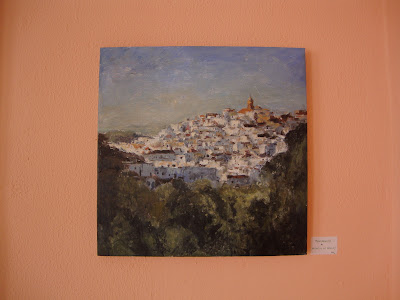 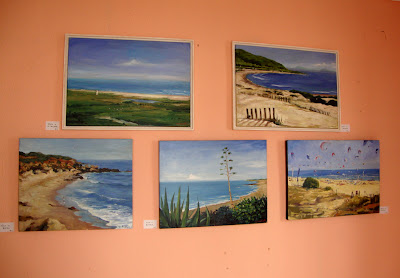 Acrylics by Andy Russell in the Flamenco Bar: 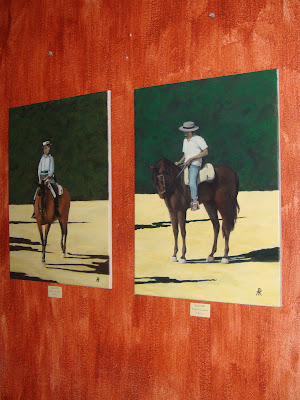 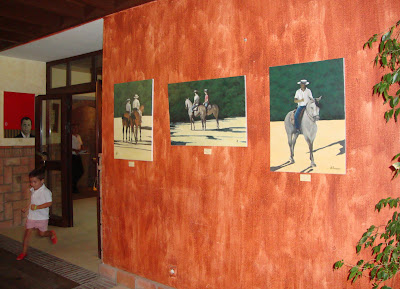 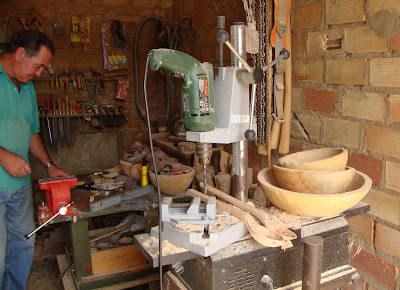 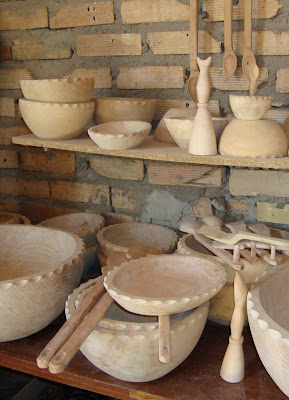 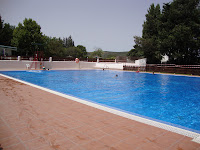 Inexplicably, we had never visited Alcalá's splendid municipal open-air pool until a week ago.  Now we are there every day.  So much less hassle than driving 50 km to the beach!

The 50m pool is open during the school summer holidays, from mid-June till mid-September, between 1 pm and 7 pm every day except Mondays.  Entrance is around €2, a little more at weekends.  There is a separate pool for toddlers, a cafe-bar selling drinks and snacks, and plenty of shade amongst the pine trees to picnic or relax after your swim.  Everything is spotlessly clean and there are a couple of lifeguards to make sure people behave themselves.

The pool is located at the bottom of the town near the El Prado housing estate, by the roundabout at the junction between the CA6200 and the A2304.  There is plenty of space to park.  You can walk there in ten minutes from the town centre, but be warned - walking back up the hill is only for the young, fit or insane.

This is a translation of a statement posted on Facebook today from the Alcalá council employees, following a fruitless meeting with the mayor earlier today.  They are now owed three months' back pay by the Council, and are effectively working for nothing.  I urge you to read it, especially if you live in or have property in Alcalá.

In the past, we could have counted on the fingers of one hand the number of times we said this. These days, unfortunately, we say it a lot.

Some of us can only eat thanks to our families. The letters arrive from the bank warning about delayed payments and increased overdraft charges, our phones are cut off for non-payment, cars are kept in the garage because we can't afford the new tyres needed to pass the MOT, and because the insurance ran out weeks ago - renewing it is out of the question. Our workmates can't afford to go on holiday, only to the beach with a sandwich lunch; others can't even to fill the petrol tank and drive to work. All in all, 2012 is turning out to be a great summer.

And all thanks to the bad management of politicians past and present in our Town Hall, because that's the reason why they aren't paying our wages. As one of the sayings popular on the social networks goes, “there's too much month left at the end of the money.” Although in our case, it's even worse. It's now been three months, and still nothing is happening.

Neither the political leaders nor the local government are saying anything. The days go by as if they weren't there, and if they really are worried that the council workers aren't getting paid, it doesn't show, it's as if they are hollow and without feelings. Certainly the Mayor, Don Julio Toscano, and the Deputy Mayor, Don Juan C. Fernández Luna, get paid punctually, one as a doctor and one as a professor, and it seems that any feeling of solidarity towards their municipal employees, who aren't earning, has disappeared completely. To cap it all, the opposition look on passively like spectators at a bull-fight, as if waiting for the bull to knock down the dwarf so they can have a good laugh.

We, the municipal workers, are not politicians, nor leaders, nor councillors. The people didn't vote for us. We do not have the solution to the current problem, even though we have carried on offering our collaboration and participation to try and find it. We carry on doing our jobs so that the wheels can keep turning, even though we haven't received our salaries and have to endure day after day of the political giants fighting it out in the bullring.

And to make matters worse, it will soon be the August Fair and with it a big financial outlay which the Council, that is to say the people of Alcalá, have to face. But we won't have to worry, because they are already looking to find the money for that. Bread and Circuses, as the Roman emperors said when they put on their games to keep the slaves happy. The Fair will take place even if there is no money, because they have already taken it from the public sector employees.

The municipal workers are the engine of the Town Hall, the gears of a system that must be oiled and ready to make life easier for our citizens, to whom we provide services. But the team currently in ofice don't seem to know that, or don't want to know, and don't realise that the engine is on the point of burning out.

July has come and gone, and we still haven't been paid ...