After 316 days Spain has a government again.  The general elections in December 2015 and June 2016 saw the conservative Partido Popular (PP) win the most seats, but not enough for an overall majority, and the various parties failed repeatedly to organise pacts with each other.

Mariano Rajoy, leader of the PP, needed the support of the other parties in last Saturday's investiture vote to allow him to form a government.   The anti-corruption party Ciudadanos agreed some time ago to vote Yes, the anti-austerity party Podemos would always vote No. Until recently, Pedro Sánchez, leader of the centre-left Partido Socialista Obrero Español (PSOE) insisted that it would vote against it too: "No means no". But a coup within the party last month, led by Andalusian leader Susana Díaz, saw him forced to resign.  Ostensibly to avoid a third round of elections, the PSOE general committee agreed to abstain, which was enough for Rajoy to win.  Sánchez resigned his seat in order to be able to vote No, and will stand in the forthcoming leadership election.

Here in Alcalá de los Gazules there is an air of betrayal and muted rage - few people want to speak out.  Below is an abridged translation of an article published in the online newspaper La Voz del Sur, in which the writers compare this silence with the "omertà" observed by those loyal to the Mafia.

The Cradle of Andalusian Socialism: between 'omertà' and indignation
A trip to Alcalá de los Gazules, a town in the La Janda region of the Province of Cadiz, which for decades has been one of the epicentres of the foundations of the PSOE's political power in Spain.  Here they are holding their breath in the land of the Perales, the Pizarros, the Blancos, the Aidos... in the week in which the Socialists, led by an Andalusian woman, awarded the government to the PP for the first time in the history of the democracy. 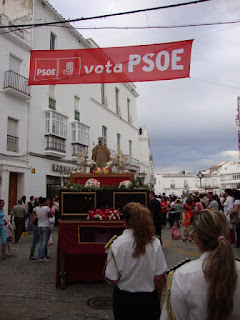 Sicily has a word to define the regime of silence and loyalty to the mafia: omertà.  Alcalá de los Gazules, christened by others as the "cradle of Andalusian socialism" and for years one of the biggest centres of the foundations of political power in Spain, seems to be living these days in a self-imposed silence.  Many of the inhabitants of this white village felt deeply that no must mean no.  However they feel they must remain quiet or say little about how "no" turned out to be an abstention (which in this case was the same as saying yes).

Kept going by cork and livestock, with a scrapheap of construction workers who lost their jobs after the crash, and with a brutal population decline since the middle of the last century, the town appears indifferent (superficially) to an investiture in which Mariano Rajoy will once again be president of the government thanks to the abstention of the PSOE.

"Of course people are indignant, but I prefer not to speak" commented Maria Luisa, of Curro Japón's butcher's shop in the covered market.  But she added;  "Personally I think it's terrible that the PSOE allowed Rajoy to govern, but what else could they do.  The town is very divided.  There are many disillusioned PSOE members and many who don't even want to talk about it.  Me, I don't like politics."  Manolo, the greengrocer, confessed "I'm PSOE, I have an opinion but I'm keeping it to myself.  We can't go eleven months with no government in Spain.  It's what Pedro Sánchez should have done before ... don't photograph me."  He doesn't believe that his party is definitively shipwrecked.  "The PSOE isn't finished.  There will be people who can revive the party, we have to had it over to the younger ones with fresh ideas,.." 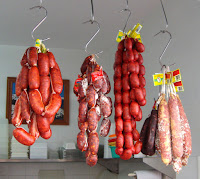 Between the greengrocer and the butcher, Isabel, a regular customer, is taking a rest.  She takes out a packet of Ducados, lights up and says defiantly: "I am a socialist, this is the cradle of socialism, and here everyone is outraged but nobody wants to say anything.  Rajoy again?  All that's left for me is to not vote.  Felipe [Gonzalez, former president of Spain] and Susana [Díaz, current president of Andalusia] are the ones who set it all up.  At the end we're left with nothing."  She added: "As for me, I don't care whether I speak out, I'd tell her to her face if necessary."

But Isabel is an exception among those we spoke to while walking through the town.  The vast majority passed over the topic, or offered a timid gesture of approval when asked what they thought about the abstention.  "In the towns there is still an ingrained fear of taking sides, it's as if the agricultural workers still depended on the favours of the politicians", said another local who wouldn't even give their name.  In Alcalá, one of the "universities of Spanish politics", this unwillingness to speak comes as a shock, hiding behind the excuse: "I just don't talk about politics".

Up in the Alameda, the central square of the town, there is little movement on this Wednesday workday.  Even the old folks' centre is empty of its usual domino-players.  "It's hardly worth me opening" complains the proprietor of its cafe.  We throw the question at him: "What do you think about the PSOE allowing the PP to form the government, for the first time in the democratic history of this country?"  The only local who was propping up the bar promptly got up and left.  "The insurance for being self-employed is really expensive, and whoever gets in, it's going to be the same. I'm telling you the truth, neither Rajoy nor Sánchez nor anyone.  I'm staying neutral because I know that whoever gets in, it will be the same."

From Alcalá came the first MP for Cádiz in the new democracy, one Manuel Chaves, and from here also came the woman who became the Minister for Equality in Zapatero's PSOE government.  She then went to the USA to work with the UN.  Her name was Bibiana Aido, and her father, Paco Aido, was the first mayor of the renewed Democracy in this town.  In Casa Pizarro, famous for its wild boar stew, they speak of their illustrious guests as if they were visitors to the theme park of Andalusian socialism.  "Here we have fed Felipe González, Guerra, Manolo Chaves, Rubalcaba..." remembers Javi Pizarro, current owner of the family restaurant.  His uncle is Luis Pizarro, who held public office for 37 years - one of the most long-standing salaried politicians in the country and Manuel Chaves' right-hand man during a good part of his period as president of the Junta de Andalucia. 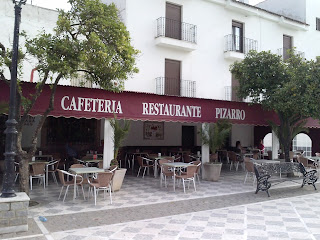 The hundred-year-old Party is living through an internal war such as nobody can remember.  "I'm not political, I don't know if what they are doing is a good thing or a bad thing", remarked a customer in Alcalá's Real Madrid supporters' club.  The waiter didn't want to talk either.  Others turned a deaf ear while drinking their beer and reading the sports paper.  "We aren't political", said another customer, as if inviting us to desist.  In the street, retired construction worker Antonio Garcia did speak:  "I'm a socialist, yes.  Right now I'm not very happy with them.  I don't look well on what they are doing, but I believe that they have done it so there won't be a third election..."

We return to the area which is known as "La Playa".  In Pizarro's, a handful of customers order beer and tapas.  "Before, we had twelve staff, now there are six" said the owner.  While serving a tapa of wild boar, Javier Pizarro admitted that "before, I was PSOE but with Zapatero I made a clean break; I voted PSOE in the town because my cousin was standing as mayor, but I vote for Rajoy.  They are all the same, but the only PP supporter in my family is me."  First cousin of pop-singer Alejandro Sanz (Sánchez Pizarro), the innkeeper lamented the decline of the town.  "It's nothing like it was twenty years ago.  In the 1940s there were 16,000 inhabitants, today there are scarcely 6,000.  It should be one of the richest towns in Spain, others like Medina and Vejer have made a lot of progress.  It has been left in the hands of God by the politicians we've had, though now my cousin is doing reasonably well."

Paradoxically, the PSOE lost the mayoralty in 2011 through an "unnatural" pact between the PP and the IU [United Left].  In 2015 the PSOE once again occupied the mayoral seat; the current holder is Luis Pizarro's son Javier "Pata" Pizarro Ruiz.

From the Alameda the lawyer Pedro Sainz de Andino, "favourite son" of Alcalá, looks unperturbed over the streets.  Far from the abstentions, this illustrious Alcalá man was founder of the Spanish stock exchange in 1831, but perhaps he could not have imagined that half a century later would be born the party which made his native town famous.  The families of the so-called "Alcalá Clan" strengthened the roots of the socialism of Pablo Iglesias Posse.  The clan started on its path in the Transition period, in a flat in Cadiz where they met amongst cigarette smoke and their study books: the Perales, the Pizarros, the Blancos, the Almagros ...

"Alfonso (Perales), he was a real politician, he fought for the people, not of the Left nor of the Right, with ethics and with morals.  Like Suarez and Anguita.  Now they only want to live the story. He was in politics to help people, not to sink them", roars the owner of Casa Pizarro.  During a posthumous homage to this historical socialist leader, Chaves came here and affirmed that "the people of Alcalá are in charge".  And so it goes on.  With much less power - like the PSOE itself - but in charge nevertheless; keeping quiet, immersed in their contradictions but keeping afloat, perpetuating the saga, keeping the network as closely knit as possible ...

Did I mention that Alcalá de los Gazules is twinned with the Sicilian town of Bisacquino?  It's there on a sign on a bend in the road as you arrive in the town from the A-2003 from Jerez.  A mere coincidence. 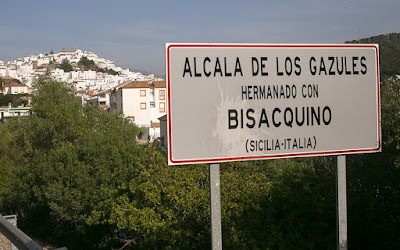