In response to the event described in the previous post, here is a translation of a statement from the local assembly of the IU (Izquierda Unida - United Left).  The original can be found on their Facebook page.

This weekend in Alcalá de los Gazules there is a meeting of the leaders of the fractured Spanish Socialist Workers Party. On this date is celebrated the 130th anniversary of the short-lived – it was only active for two years – but important socialist group at the end of the 19th century; a collective of workers which, during its years of existence, developed a programme of education, agitation and awareness on behalf of the most needy. These Marxists and atheists fought belligerently against the exploitation, misery and hunger of their countrymen and women. It was one of numerous associations, many of them anarchist and longer-lasting, which fought against the injustices of a regime of despotism, privilege and repression.

Alcalá was an undeniable example of the organised working-class struggle. Years before, in the anarchist congress of the Andalusian Regional Federation celebrated in Seville in 1882, was represented the Sociedad Campesina de Alcalá de los Gazules, which in its time had 180 members, of whom 175 were agricultural labourers, channelling the libertarian ideal of their aspirations. It was the same situation in the Second Republic, and more recently during the late Franco period with the CNT at the head. In these first democratic municipal elections, foreseeing the twists and turns of the politics of the Bourbon monarchy which would never offer a dignified future, the CNT asked for an abstention, which it won with more than 42%.

It was the Anarchist Confederation which organised the occupation of the Town Hall in 1981 asking for the direct management of the surrounding countryside, agrarian reform, work and dignity for men and women doomed to unemployment or emigration. More than 600 families occupied the building for weeks, counting on solidarity, as much from other Andalucian syndicalist organisations as from the State, and also from businesses, students, intellectuals and sympathetic neighbours. And it was the CNT which in 1983 organised the occupation of the Church, in a last attempt to block what they could see coming.

Because far from what those first founders were doing, the municipal “Psocialista” government did not take on board the complaints of the people in the occupation. Instead they established a system of strict personalised control over the scarce forms of access to work in the surrounding countryside, and over the PER [Rural Employment Plan] … essential at the end of the 20th century and the beginning of the 21st in order to receive unemployment subsidies. What some studious observers have come to call a “new form of despotism” was set up, based on the premise that those working-class people who disputed the ideas of those in power, now the PSOE, would be excluded from the means of access to work; they would be condemned to a life of unemployment. The first Bolsa de Trabajo [temporary jobs for the long-term unemployed, provided by the Town Hall] did not arrive until the 21st century.

This repression resulted in the sentence of unemployment, due to their political views, of many local people and the forced migration of others, totally defenceless, with the consequent stigmatisation and social marginalisation.

Today, Alcalá presents devastating levels of unemployment. The populations survives on subsidies and informal labour - without any form of guarantee – to be found in forestry and other work in the surrounding countryside. So only the cork harvest in these forests provides any sort of regulated salary, and revives the degraded economy of the inhabitants of this town.

The steady drip of emigration continues. The young have no future. Graduates are washing dishes in the British Isles, and the luckiest ones maybe, like their grandparents in Catalonia or Germany, finding employment abroad. Those who stay have to struggle along, like their parents, scraping a living off the land – an uncertain existence, far from the prosperity and hopes that their forebears fought for.

Alcalá de los Gazules owes its situation to the PSOE. It is the town where the “Psocialistas” crystallised. Where for decades they have relied, for good or bad, on the support of the organic party hierarchy and of the governing institutions in Andalucia and the State.

This weekend the representatives of this party are meeting in Alcalá. The majority of them are professional politicians in an organisation which despises its working-class past. A structure which is one, among others, of the biggest allies of the worst capitalism which humanity has lived through to this day. An organisation whose leaders have conspired with the most reactionary right-wingers and have allowed the PP to govern the country, and which maintains flagrant cases of corruption currently going through the justice system.

The Assembly of the United Left and Green Party in Alcalá de los Gazules wants to denounce the fact that these leaders have manipulated the sacred memory of those first Marxist founders of the socialist group in Alcalá, who in turn would feel ashamed of this indolent hierarchy, friend of the powerful. The IU wants to show instead its acknowledgement, not only of the men and women who founded that first group, but those who participated and gave the best part of their lives to the libertarian and communist groups which existed in Alcalá. To the ecologists, feminists, activists for human rights and sexual liberation, anti-militarists … to all those Alcalainos who fought and still fight today for the dream of achieving a world that is more just, free, fraternal and supportive.

130th anniversary of the PSOE in Alcalá 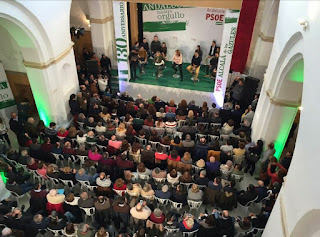 This weekend Alcalá welcomed a number of bigwigs from the Partido Socialista Obrero Español (PSOE, the Spanish equivalent of the Labour Party) to commemorate the 130th anniversary of the party in in the town.  It was the first rural branch in the whole country, but only survived a couple of years. Speakers at the event, which was held in the Santo Domingo cultural centre, included Susana Díaz, president of the Junta de Andalucía and candidate for leadership of the national party in the forthcoming elections, and Alfredo Rubalcaba, leader of the party from 2012 to 2014.