An evening at the Beaterio

At the heart of Alcalá de los Gazules, literally and figuratively, is the Beaterio de Jesús, María y José. It is tucked in between the church of San Jorge and the remains of the castle, at the highest part of the town. The entrance is in the narrow street which bears the name of its founder, a priest called Diego Angel de Viera. 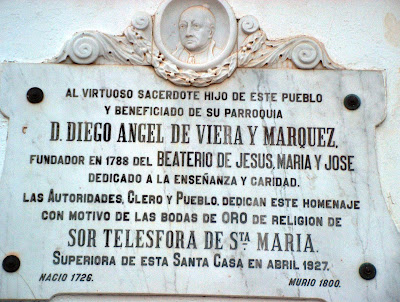 The Beaterio opened in 1788 to provide free care and education for those in need. Today, this takes the form of a hospice for the elderly, and a school with boarding facilities for kids who don't have a stable home life, both run by a small but energetic group of nuns and volunteers. There is also a delightful chapel and a walled garden with spectacular views over the town and the surrounding countryside. 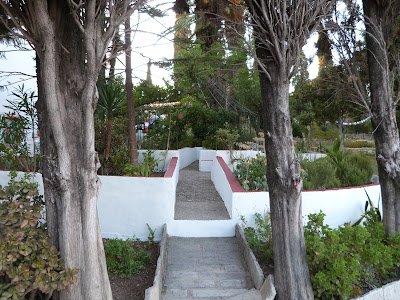 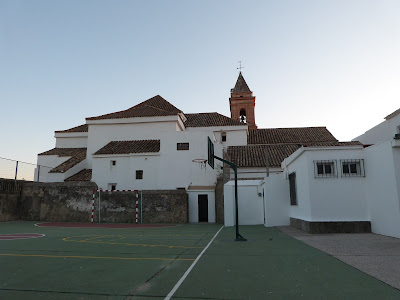 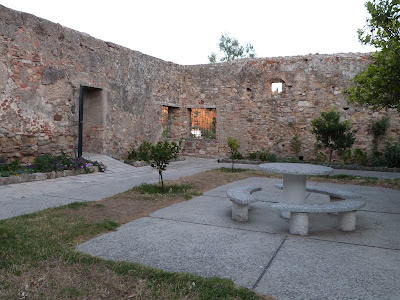 Last Friday we attended a concert there to raise funds for a well to provide clean water and irrigation for a village in Kenya, part of a project undertaken by three Kenyan nuns currently staying at the Beaterio.  It was a great chance to take a peek round the building and the grounds, and enjoy a highly entertaining evening of local talent.  I managed to park myself in the front row with my camera, and record some of the highlights: please forgive the occasional wobble, but hopefully it gives an indication of the wonderful atmosphere!

A Postcard from Spain 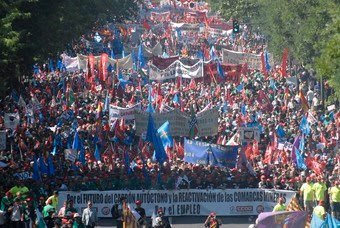 Greetings from Sunny Spain!   In fact it's so sunny and hot we can't go out in the daytime, so we've been staying in and watching TV.  There's so much going on!  Some coal-miners from Up North have walked all the way to Madrid to complain that the government has kept some money from the EU which was meant protect their livelihoods, and spent it on something else. How daft is that!  But they are making themselves useful by helping burn the rubbish in the streets, entertaining the crowds with fireworks, and giving the police some target practice for their rubber bullets. (PS did you know rubber bullets are nearly as big as cricket balls?!  I thought they were little tiddly things that just bounced off, but apparently they can do you a lot of damage!) 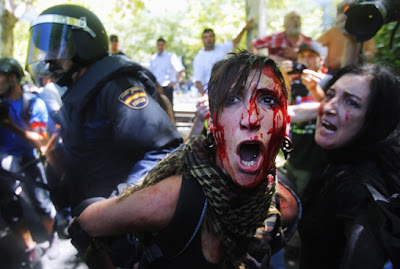 The police will need lots of practice, because all the unions are coming out to demonstrate about tax increases, schools and hospitals closing, pay cuts etc etc. The public sector workers are cross because they won't be getting their extra month's pay at Christmas any more, apparently the banks need the money or something.  So they'll just have to max out their credit cards to do their Christmas shopping, like everyone else!  That will help the banks too! 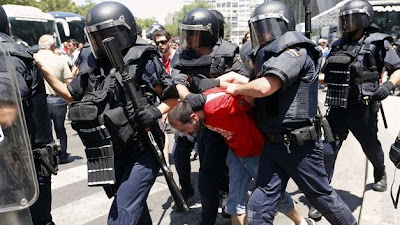 And the pensioners aren't too happy because they've got to start paying for their prescriptions.  Well, you know what old folks are like, always moaning on about something or other!  They'll just have to take better care of themselves and not get ill!

The media here are pretty crap really, they keep getting things wrong.  For example two weeks ago they reported the President as saying that the €100 billion bailout for those poor Spanish banks wouldn't have any strings attached, but what he really meant was that there would!  €62 billion more austerity measures!  Do they really think you get something for nothing?  They also claimed he said VAT wouldn't go up, but they got that wrong too because it's going up 3%, and he wouldn't lie about something as important as that, would he?  They really should pay more attention, I'm sure if they asked him a straight question he'd give them a straight answer. 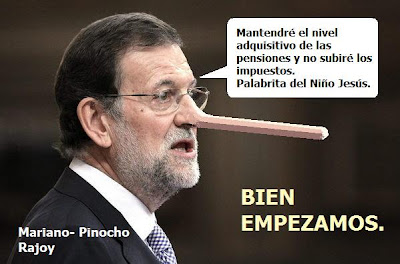 He seems such a nice man, this Mr Rajoy. At least, his government thinks so because they cheered like mad when he announced a big cut in unemployment benefit!  Quite right, they should get off their backsides and do some work (the unemployed I mean, not the politicians!!! LOL!!!!!). 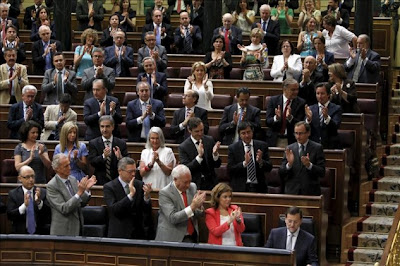 One lady MP shouted "Que se jodan" which means something like "Let them fuck themselves".  The newspapers kindly printed her email address so readers could send her a message of support.  (It's  andrea.fabra@diputada.congreso.es, if you want to drop her a line.)  Apparently her dad, Carlos Fabra, is a famous criminal from Valencia, although he's obviously very clever because they haven't managed to lock him up yet.    It's nice to know the county is in good hands, not like poor old England! 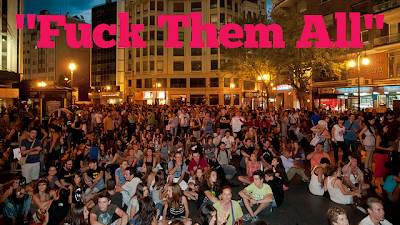 "No hay dos sin tres" - Spain's footballers do it again! 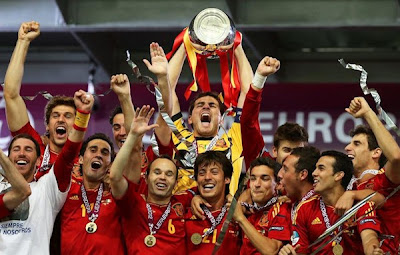 There can't be many people on the planet unaware that Spain has just become the first country ever to win three consecutive European and World Cup titles - hence the catch-phrase for this year's Eurocopa "No hay dos sin tres" (there are not two but three, the equivalent of the English saying that things always come in threes, or "it never rains but it pours").

There's even a song with that title, performed by Spanish pop star David Bisbal with the Colombian duo Cali & El Dandee, which has been played endlessly on TV and radio since the tournament started back at the beginning of June, helping Spain to raise her spirits and put her economic woes to one side for a few weeks.

Although la selección española were the bookies' favourites from the start, there were plenty of begrudgers complaining that the team had lost its edge, that it would never get past the ever-improving German side (in the event, it didn't face that test as Germany was knocked out by Italy), and even a few deluded souls suggesting that England were in with a chance under their new manager Roy Hodgson.

During the tournament there were some tense moments for fans of la Furia Roja (the Red Fury, as the team is known here, or simply la Roja).  The only time it looked really confident and convincing in the qualifying stages was against Ireland (4-0), and to be frank, even England would have looked confident and convincing against them.  It barely scraped through a hard-fought tussle with Croacia, spared by a last-minute goal by Jesús Navas (Jesus Saves!!) and the skills of the world's finest goalkeeper Iker Casillas.  Spain couldn't score at all in the semi-final against Portugal, a spiteful game full of unchecked fouls and cynical diving, finally settled by a penalty-shoot-out in which Portugal's star player Cristiano Ronaldo foolishly put himself on at number 5 and didn't actually get a chance to put the ball past his Real Madrid team-mate.

Spain's style of play doesn't appeal to everyone. "Spain are control freaks who hold on to the ball and keep opponents from scoring by wearing them down", complained Rob Smyth in The Guardian.  "Everyone accepts they have achieved an unprecedented level of technical excellence. It's just that some people like salt in their paella."  Manager Vicente del Bosque was criticised for fielding a side without a recognised striker much of the time, relying on midfielders to come forward or defend as required and using Fabregas as a "False 9".  Even Arsenal manager Arsene Wenger had a go at them before the final, questioning if Spain were "betraying their philosophy" by being over-cautious with their ball control, and had lost their sparkle.

But their 4-0 victory in the final against Italy on Sunday must surely have made the critics eat their words.  Everything came together on the night, and all the players were at their sparkling best.  The Italians fought hard but were hindered by injuries (they ran out of substitutes and had to finish the match with ten men).  In the end they were worn down by teamwork, tiki-taka and the sheer brilliance of midfielders like Player of the Tournament Andrés Iniesta.

Now la Roja is being hailed as the best side in history.  Millions lined the streets of Madrid to welcome them home yesterday.  In Alcalá a few red-and-yellow flags are still flying and the smiles on people's faces will last  much longer than Monday's hangovers.

It's not over yet of course.   Three of the team will be in Spain's Olympic squad next month, and the whole country is looking forward to the 2014 World Cup in Brazil.  No hay dos sin cuatro?