This Pamplona thing - what's it all about?

The nine-day San Fermin festival ends today, and the world´s media is once again aghast at the number of people (mainly foreigners) gored and trampled during the infamous 8 a.m. bull runs through the streets of Pamplona.

The question they are all asking is why, in the 21st century with all its health and safety regulations and increasing concern for animal welfare, is this event still allowed to take place?  I can't begin to answer that, but none of the runners take part without knowing the risks, and (unlike the bulls) they have chosen to do it. Some of these same newspapers are equally horrified at idea of their personal liberty being restricted by the state.  You can't have it both ways.

So given that you are crazy enough to want to follow in Hemingway's footsteps and run with the bulls, what are the risks?

There are health and safety measures, including a double fence to protect the crowds, and a comprehensive list of rules for participants, who must be over 18 and must register beforehand.  These include wearing appropriate clothing and footwear, not being under the influence of alcohol or drugs, and not attempting to touch or distract the animals.

There have been 15 deaths at San Fermin encierros since records began in 1910 (compared, incidentally, to 240 at the Isle of Man TT races over the same period).  The deaths are nearly all from being gored by a bull's horns, known as a corneado.

Every year between 200 and 300 people suffer minor injuries, mainly from falls. Yesterday's serious injuries were to runners caught in a tapón, where the narrow entrance to the bullring becomes blocked with people and the bulls stampede into them. There is a claim currently under investigation that one of the gates was left closed by mistake.   But a tapón is a relatively rare event, having occurred maybe ten times in recorded history.

The festival is named after Saint Fermin, a Roman who converted to Christianity and became the first Bishop of Pamplona in the 3rd century. Originally the ceremonies honouring the saint were held in October, but in 1591 they were transferred to coincide with the cattle-trading fairs which took place in July, when the weather is better. The festivities included an opening speech or pregón, music, theatre, tournaments and bullfights. Firework displays and dancing came later.  By the 19th century the festival had extended to nine days' duration, and included bizarre fairground attractions such as a woman being fired from a cannon.

The Spanish term for bull-run is encierro, from the verb encerrar (to enclose or lock up). Traditionally the bulls were kept overnight in an enclosure outside the town, and driven on foot through the streets early next morning to the bull ring ready for the afternoon's corrida. Their minders would shout and goad them in order to hurry them along, and It became the tradition for young men to show off their bravado by running in front of them. Records in Pamplona from the 17th and 18th centuries refer to bull runs attracting increasing numbers of foreigners, and express concern about excessive drinking and decadence.  Things haven't changed.

There is, though you wouldn't know it from the English-speaking media, a whole lot more to Sanfermines than bulls. Other "attractions", which attract a million or so visitors each year, include:

El Chupinazo - the festival kicks off at noon on 6 July with a giant rocket fired from the town hall balcony, followed by ... excessive drinking and decadence. 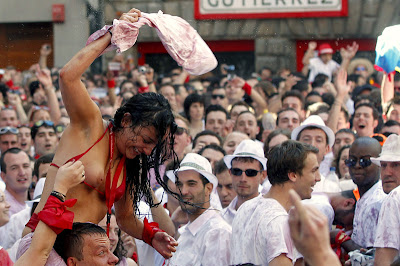 The Comparsa de Gigantes y Cabuzedos - the daily parade of giants and “big-heads” dates from the mid-19th century.  The eight "giants" are 4 metres high and represent kings and queens of different races and countries.  The remaining 17 figures include kilikis and zaldikos who run around with foam truncheons frightening the children.

Procession of San Fermin - on 7 July a 15th-century statue of the saint is carried through the streets accompanied by revellers, dignitaries and dancers, who perform the traditional jota in his honour. 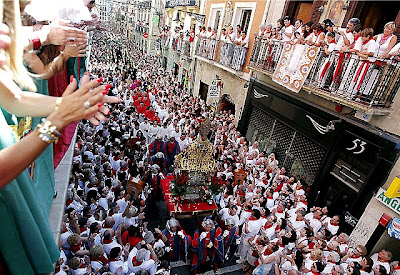 El Estruendo - the Roar - takes place on a different day each year.  Basically, it involves assembling at 11.59 a.m. outside the Town Hall and making as much noise as possible for as long as possible with any object that comes to hand.  The origins of his 50-year-old tradition are unclear. 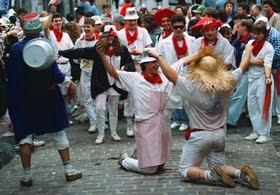 Firework displays - held every night in the Ciudadela.  (Recession?  What recession?) 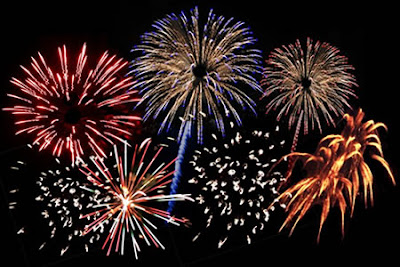 Traditional sports - every morning in the Plaza de los Fueros you can see examples of Basque sports such as Jai alai, a version of pelota, and rural pursuits such as bale-tossing and wood-chopping. 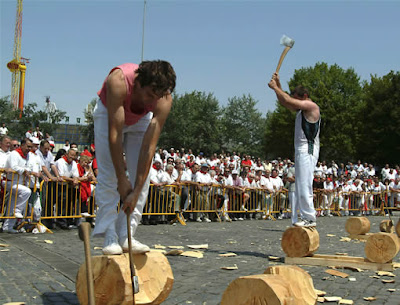 Pobre de mi - For anyone left standing after nine days of partying, this song ("Poor me") is sung at midnight on 14 July in the town square to round off the event.