We hear with depressing regularity about natural habitats being destroyed in the pursuit of profit. So it's good to learn about a project where the opposite has happened, thanks to the hard work and persistence of a group of environmental conservationists.  Such a project is the Laguna de los Tollos, near the town of El Cuervo just north of Jerez.

Until 1976 this lake was an important stopover for wetland birds, including flamingoes in their thousands, winging their way between the Coto Doñana and the Laguna de Fuente de Piedra in Málaga Province.  It was also a breeding site for purple swamp hens (aka purple gallinules), crested coot and the rare white-headed duck.

Then along came Hefran SA, a mineral exploitation company, who dug a pit next to the lake to extract the special clay needed to produce Fuller's Earth - a mineral used in the pharmaceutical industry and in the production of cat litter. The effect on the lake was catastrophic.  The water level dropped and the extent of winter flooding was dramatically reduced.  The claypits and waste encroached into the lake itself and polluted the water.

Unfortunately the site was not protected by any environmental legislation and there were no legal constraints on Hefran.  It was finally designated as a conservation area in 1986, but the destructive mining activity continued.  Various groups of ecologists and conservationists organised protests and petitions demanding that the Junta de Andalucía put an end to the clay extraction, and in 1994 a report by the Junta's own Environment Agency confirmed that the quarry was causing serious environmental damage and should be closed.  Four years later, after a lengthy court case, the mining consortium gave up and abandoned the site - but there was no requirement to restore it to its former glory.

Over the next few years Los Tollos was used variously for clay-pigeon shooting, off-road 4x4 racing, and the general plundering of nests and protected wildfowl.The tenacious ecologists didn't give up though.  With the Junta de Andalucía now firmly onside and prepared to make a substantial financial contribution, they managed to procure additional funds from the European Union's "Life" programme and begin the process of acquiring the land and planning the project. 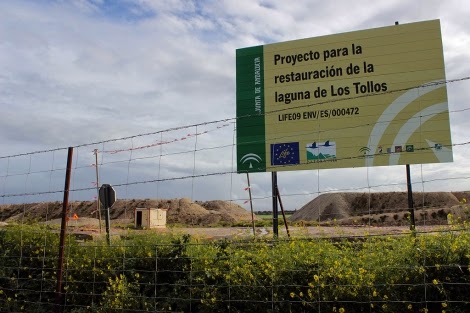 Work began in the summer of 2013 to restore the hydrological status quo.  They had to pump millions of gallons of water out of the claypits and back into the lake, refill the pits with sand and the clay previously extracted, then remove the dyke which separated the pit from the lake to let the water find its own level again.  An educational programme was launched to engage the local population, who participated enthusiastically in the task of replanting trees and vegetation.  The total cost was around 8 million euros.

The restoration work was completed last week, and already the birds are coming back. Birding expert John Cantelo reports on his excellent blog Birding Cádiz Province:

"On my first visit in early April 2014 I found the place alive with birds once more, but, significantly, the high water levels were no longer simply a matter of fortuitous winter rain, but of careful planned management.  The birds included Purple Gallinule, over 30 Black-necked Grebes, half a dozen Flamingos, similar numbers of Spoonbill, a good variety of ducks (Pochard, Red-crested Pochard, Gadwall, Shoveller & Mallard), a couple of dozen Whiskered and a few Gull-billed Terns, Avocets, Black-winged Stilts, Little Ringed Plovers, Collared Pratincoles and  in excess of 300 Coots (perhaps a hopeful sign that Crested Coot may soon return).  A subsequent visit in early May produced similar range of species plus several passing Curlew and Common Sandpipers and, best of all,  3-4 White-headed Ducks.  Some eight birds are present this summer and hopes are high that they may soon  breed once more.  Other birds present on the reserve this spring include Purple Heron, Little Bittern, Great-reed and Melodious Warblers.  Later in the season the tamarisks  here should also be worth checking for Olivaceous Warblers.   Black-winged Kite are present nearby and during passage almost anything might turn up.  I certainly found  much more of interest on my two visits to Laguna de los Tollos this year than I managed to find at Laguna de Medina, a much better known and more highly regarded site." 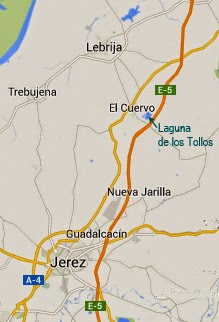 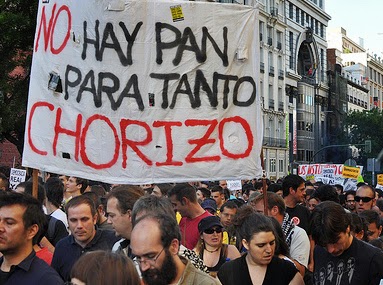 No, this is not a post about food.  "Chorizo", as well as being a famous Spanish sausage, is a slang word for thief (probably derived from the gypsy word chori).   The slogan is saying that there are so many chorizos in the country (in the form of politicians, businessmen and bankers lining their pockets)  that there isn't enough bread to go round.

But the chickens are coming home to roost. In the past month alone, 127 potential chorizos have come under investigation, 38  have been locked up and 37 have resigned from their posts.  A staggering 75% of cabinet ministers from José María Aznar's last PP government (2000-2004) are currently either in prison or under investigation.

The latest scandal to hit the country was Operación Púnica, an investigation into bribes for contracts. Last Monday saw 51 arrests in a sweep across Madrid, Murcia, Valencia and León last Monday.  Four have been held on remand, including two mayors. Millions of euros were found hidden in Swiss bank accounts.

Earlier in October we learned about the secret credit cards used by senior staff in Caja Madrid, one of the Madrid banks bailed out by the government.  Over 15 million euros were spent on clothes, restaurant meals etc; this perk came on top of their official expenses, for which they had a different card, and which were disclosed to the tax office.  One of them, former deputy prime minister Rodrigo Rato, has paid bail of €3 million and has been suspended from the PP membership.  His colleague, ex-bank president Miguel Blesa, couldn't raise his €16m bail and remains incarcerated.


The investigations into the hidden accounts of undeclared donations to the Partido Popular, revealed by former party treasurer Luis Bárcenas, roll on.  Last week it was revealed that work on their Madrid headquarters was paid for with "black money".  The former PP general secretary Angel Acebes was called to testify in the High Court but stubbornly denied all knowledge of the party slush fund, despite the mountains of evidence.  Current President Mariano Rajoy, who also denies all knowledge, was obliged to offer a public apology:


“I apologize in the name of the PP to all Spaniards for having given positions of responsibility to individuals who were not fit for it,” he said in the Senate, echoing earlier statements made by senior party official Esperanza Aguirre, the first member of the party to issue an apology.


Closer to home, former PSOE mayor of Jerez de la Frontera Pedro Pacheco has been jailed for five years for misuse of public funds.  In Andalucia, judge Mercedes Alaya continues to gather evidence that money
destined for redundancy payments and training courses for the unemployed right across the region found their way into the wrong hands.


There are many more similar cases.  Every time you turn on the news, some new scandal has broken.  It's a healthy sign though; Spain can't move forward until all this poison has been exposed and expelled.  Meanwhile, some joker has speculated that with so many honoured guests expected, our prisons might be due for a makeover: 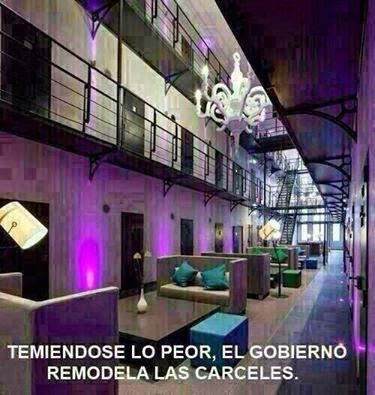