Spain's royal family, or at least King Juan Carlos, is not having a good time at the moment.

Last summer, the King's frequent hospital trips for various replacement body parts over the last couple of years led to him snapping at the press over their supposed obsession with his health: "What you like to do is kill me and have me in a coffin every day. This is what you do in the press." The comments were captured on camera and became an instant You-tube hit.

Then Iñaki Urdangarin, husband of the King’s youngest daughter Cristina, came under investigation for embezzlement. The former handball player stands accused of diverting money from his charitable institution to tax havens in Belise and the UK, and has been excluded from any official royal duties. 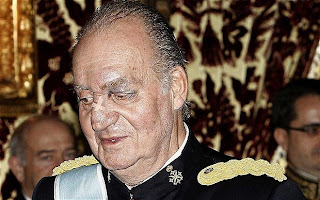 Just before Christmas JC appeared on TV sporting a shiner on his left eye and a plaster on his nose. Apparently he "walked into a door".

Last week the King's 13-year-old grandson, Froilan, shot himself in the foot during target practice at his father's country estate. He wasn't badly hurt, but it is illegal for children under 14 to possess or discharge firearms and his father, banker Jaime de Arichalar, could be fined up to €6,000.

This must have brought back unhappy memories for Juan Carlos, who accidentally shot and killed his own  brother in 1956. But far from being put off guns for life, JC went on to kill thousands more living things in a lifetime dedicated to la caza.  During a trip to Russia in 2006, he expressed the desire to shoot a bear.  Officials procured a domesticated bear, dosed it with vodka and stood it in front of our valiant monarch, who brought it down with a single shot.

The latest mishap occurred couple of days ago.  While on an elephant-hunting trip to Botswana, JC tripped on a step on a nocturnal trip to the bathroom, fell and broke his hip. He had to be flown back to Madrid in a private jet for treatment. 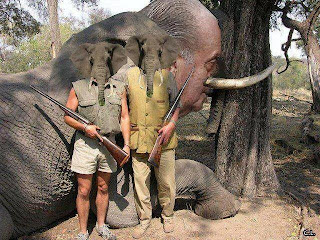 This hasn't gone down too well with his normally loyal subjects.   For a start, the trip was kept a secret.  Coinciding as it did with the announcement of  €10 billion cuts to health and education, this is perhaps not surprising.  The head of the United Left party, Cayo Lara, said that the king had shown “a lack of ethics and respect toward many people in this country who are suffering a great deal.” Speaking for the Catalan Republican Left (ERC), Anna Simó criticized the fact that the king had not joined a waiting list for his treatment: “This just shows the extent of the monarchy’s moral degradation.”

The two main parties (PP and PSOE) have not made any official declarations, but the leader of the PSM Madrid Socialist Party, Tomás Gómez, was outspoken in his criticism: “The time has come for the [...] head of state to choose between his obligations and public duties and abdication, which would allow him to enjoy a different life.”
To be fair, the Royal household is having to implement budget cuts too.  The King's entourage will only get €8.2 million this year from the State, a swingeing 2% cut (that's right, two per cent - the average across all public expenditure is 17%).  But even though shooting an elephant in Botswana costs €37,000, there's no need for JC to cut back on his killing sprees;  they plan to absorb this by lowering the salaries of their staff and cutting down on official gifts.

World Wildlife Fund Spain  is now being inundated with demands to sack JC from his role as their Honorary Presidency.  If you want to add your protest, you can sign the petition here.

'Twas on one April morning, I heard the small birds sing ...

There can be few nicer ways to be woken up (at my age, anyway) than by the song of a nightingale.  One has stationed himself in the giant eucalyptus behind our house, a resting place on his long voyage from Africa to his breeding ground in Northern Europe.  He starts trilling around daybreak and carries on through the day - he's at it right now. It makes a change from the sparrows that sit on the window railings, chirping the same note over and over again (each year they nest in our electricity junction box, right outside the front door).

I haven't heard my nightingale at night though; according to Wikipedia, only unpaired males sing at night, in order to attract a mate.

Listen to his song here

The ruiseñor will be on his way soon, but Alcalá is a birder's paradise all year round.  An ornithologist friend who has a house here writes in his blog, Birding Cadiz Province:


[Alcalá de los Gazules] has a good population of Lesser Kestrel and on spring evenings 60-70 or more may hawk over the village. Spotless Starlings are present and, although most of the swift are Common, there are a few Pallid Swift mixed in amongst them and Alpine Swift is also regular. Barn Owls nest in the church tower at the top of the hill. Around the ruined castle – a nesting site for many Lesser Kestrels –are the derelict mirador gardens from which you can get superb views across the Alcornocales. Blue Rock Thrush sometimes nest here. Birds of prey frequently overfly the village, particularly in spring and autumn. In addition to Lesser Kestrel I have recorded Griffon Vulture, Egyptian Vulture, Golden, Booted and Short-toed Eagles,Osprey, Red and Black Kite, Honey Buzzard, Common Buzzard, Montagu's, Hen and Marsh Harriers, Sparrowhawk, Goshawk, Kestrel, Hobby, Peregrine and Merlin. Bee-eaters are common on passage when both White and Black Stork may be seen.

Visitors to Alcalá can't fail to spot the big birds; griffon vultures, cattle egrets, storks and various birds of prey are everywhere you look.  But we have an impressive variety of small birds too, especially in the migration period.  To the untrained eye, the "little brown jobs" that flit amongst the bushes could all be sparrows and the ones with forked tails could all be swallows.  Only when you learn to distinguish their song and their flight patterns do you appreciate how much diversity there is: stonechat, goldfinch, siskin, serin, greenfinch and several varieties of warbler, bunting and lark are all common.

Last week I spotted two bee-eaters, just up the road from our house.  These are also migratory, and I haven't seen them in the village before. They might not be great singers; in flight they sound like a bunch of kids given a bag of referees' whistles to play with.  But they are stunningly pretty, and they eat wasps as well as bees, removing the sting before eating them by repeatedly hitting the insect on a hard surface.  They will also take lizards and frogs.

Sadly, although  illegal except under strictly controlled conditions, it is still common practice round here to trap songbirds.  They are either eaten (see Thrushes for tea) or kept in ridiculously small cages on windowsills and patios.   Local writer Juan Leiva describes how when he was growing up here in the 1940s, he and his friends would get up before dawn and go down the hill to the Prado, where they would spread sticky resin called liria on the branches to trap the birds.  They would return at lunchtime, bundle the trapped birds in a sack and take them home to their mothers.  The goldfinches and linnets would be sold as songbirds, and the rest were destined for the pot.  Memories of Alcalá 7: Liria at Dawn

I'll take my birdsong au naturel, thanks all the same ...

It's April, and it's raining.

The phrase En abril aguas mil, which is the Spanish equivalent of "April showers bring May flowers", comes from a poem by Antonio Machado:


Son de abril las aguas mil.feSemana Santa, and in Spain it always rains at Easter.  The Almighty must have a strange sense of humour, waiting till the faithful have gathered en masse (pardon the pun) to carry out their strange rituals in the streets, then pulling the plug and allowing the heavens to open.


Scenes in Sevilla yesterday, where four of the processions for Domingo de Ramos (Palm Sunday) had to be cancelled: 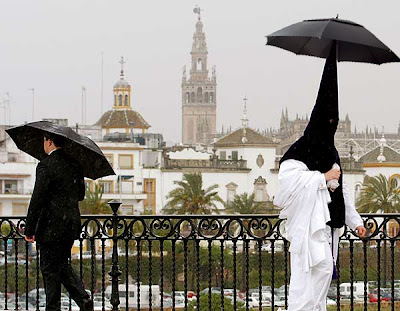 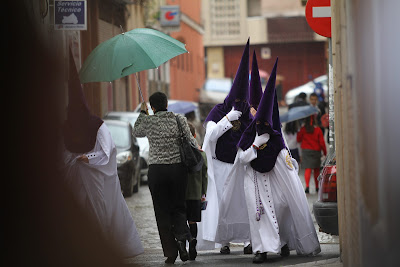 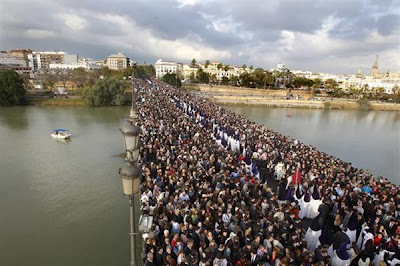 I don't know whether Alcalá's Palm Sunday procession was rained off because I don't intend to leave the house till the skies are clear again, but there are four more processions due this week and the forecast isn't good ... 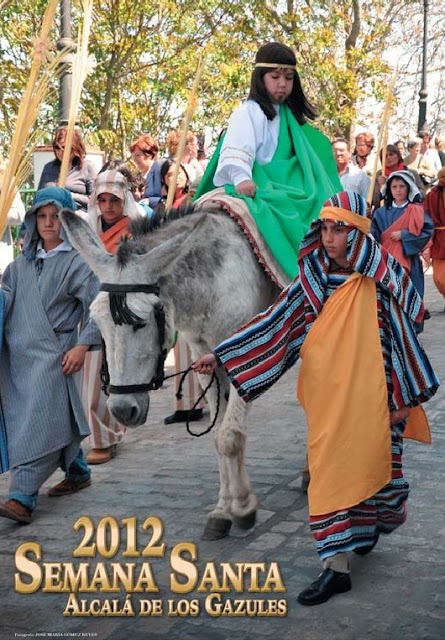