Last month at a party we were invited to try two of Andalucía's traditional sweets. They are often made together, because one uses the whites of egg while the other uses the yolks.

Tocino de cielo literally means "fatty bacon from heaven" yet it contains no bacon, no fat and is definitely an earthly pleasure.  It is made with sugar and egg yolk, and the first written record of it is dated 1324 in Jerez de la Frontera.  The reference to tocino comes from its appearance, creamy-yellow with a brown "skin".

Jerez has always been a wine-growing region, and egg whites were used to clarify the wine in the barrel.  The leftover yolks were taken to a local convent where the nuns turned them into this heavenly custard.

Although tocino de cielo can be found all over Spain, Jerez council have applied for it to be given its own protected designation of origin.

Another way of using up the spare egg yolks was the candié, derived from the English "candy egg" (most of the sherry bodegas were British or Irish owned). A couple of yolks were beaten into a glass of sweet sherry, sometimes with sugar or cinnamon added.

During the famine years of the 20th century this was a cheap and popular way of increasing children's protein intake. Many jerezanos today have fond memories of this childhood treat.

Boil the ingredients in a small saucepan on a medium-low heat, stirring regularly until you have a dark amber colour. Remove from heat and set aside.

If you don't want to make your own caramel you could use 3 tbsp golden syrup or the Spanish equivalent, miel de caña. 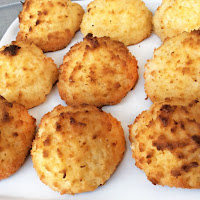 Sultanas de coco are a good way to use up the egg whites, since you presumably aren't going to be clarifying sherry with them.  Just to confuse you further, these little coconut cakes don't contain sultanas, which are pasas in Spanish.  They are of Arab origin and it is documented that Abd-ar-Rahman III, first Caliph of Córdoba in the 10th Century, offered them to his dinner guests. The Sultana was the Caliph's wife.

These tasty little cakes are popular today all over Spain, often produced and sold in convents. They are also known as coquitos or coquadas.