A few miles from Alcalá, in an area known as the Mesa del Esparragal, are the remains of an important city of Roman origin, Lascuta,  I blogged about it (and our failed attempt to visit it) a few years ago.

This is where the famous Lascuta Bronze was discovered, the first Roman inscription found in Spain (189 BC).  The original, just 22x14 cm, is in the Louvre in Paris.

The Alcalá council have just erected a much-enlarged replica of the Bronze on the Paseo de la Playa, as part of the plan to make the town more attractive and interesting to tourists. 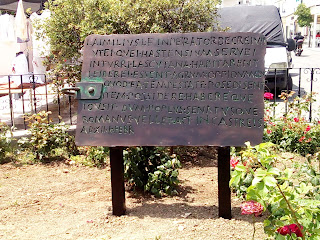 Unfortunately there is as yet no explanatory signage (these things don't necessarily happen in the logical order here), so here's an English translation.  I think it's rather nice that the early alcalainos were granted their freedom.


“Lucius Aemilius, son of Lucius, Imperator, decreed that the inhabitants of the Tower of Lascuta who lived in servitude to the Hastensians shall be free. As to the land and town which they owned at the time, he ordered that their ownership shall remain unaltered, so long as the People and Senate of Rome deem fit. Done in the camp on 19 January.”