This year has seen the adoption of two new hijos predilectos (favourite sons) by the town of Alcalá de los Gazules - one long dead and one very much alive.

The former is Diego Ángel de Viera, the priest who gave up his worldly goods to set up the charitable institution known as the Beaterio  in 1788.  There are various actos de homenage at the Beaterio throughout the year, including a musical evening on 6 July and an exhibition on 9-11 August. 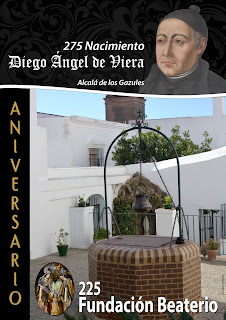 The latter is the prolific artist, sculptor and writer Jesús Cuesta Arana, who lives and works in the town and is very much a part of its cultural character. His wife Isabel taught for many years at the local secondary school, and they have recently become grandparents.  Cuesta Arana has been described as a modern-day "Renaissance man".  Ever on a quest for new projects, he has recently taken up jewellery designing and engraving.

Cuesta Arana's paintings are full of life and colour, magic and mystery, humour and ambiguity, angels and demons. Many reflect his deep love of tauromaquia (bullfighting), flamenco and his fellow Andalusians.  In his own words: "My painting is very personal .... I'm not a landscape artist, but the landscape is in the atmosphere, the surrounding air that animates the painting, I'm not religious, but you can see a great picture I painted for nuns ... I let the brushes do the talking for me. I like grotesque masks, and so my work could be described as magical realism because it unites everyday reality with dreams." 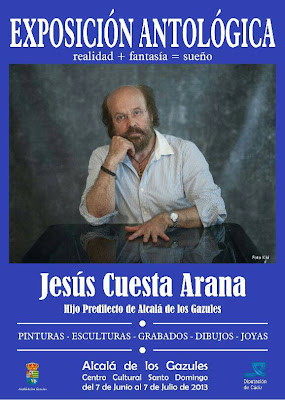 Over a hundred examples of his life's work are on show at the Cento Cultural Santo Domingo until 7 July.  Others, including his lifesize scultpures, have to be seen in situ.  A good example is the tableau dedicated to the petenera flamenco artists in the nearby town of Paterna de la Rivera. 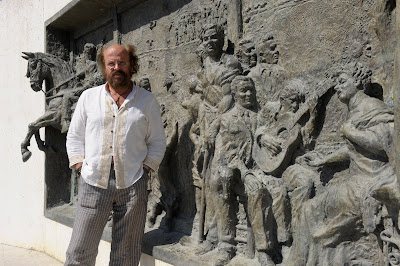 The celebrations include an open-air concert last night in the Alameda by the veteran ´60s rock band "The Rangers Black", who reformed specially for the occasion after 42 years.  On 9 August there will be a special flamenco night at the Centro Cultural Santo Domingo. 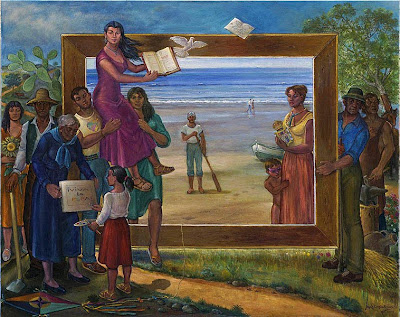 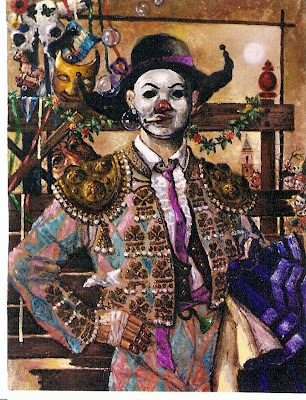 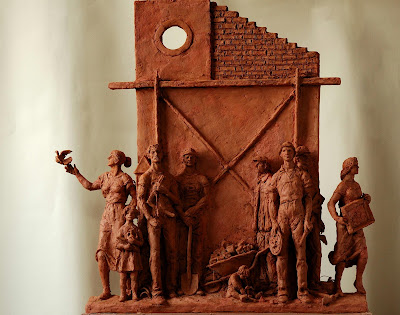 To see more of Cuesta Arana's work, visit his blog or follow him on Facebook.
Labels: culture, history, people

Last Sunday we visited Zahara de la Sierra, a pueblo blanco in the Sierra de Grazelema, the mountainous northern part of the Province of Cádiz.  We went with members of El Pavo Trotón, a group based in Alcalá which organises regular excursions.  The journey took about an hour and a half, passing through some stunning scenery.

Our trip coincided with the religious festival of Corpus Christi.  Zahara's celebrations, which originated in the 15th century, are famed throughout Spain and have been declared a Fiesta de Interés Turístico Nacional.  The locals get up early to harvest esparto grass, rushes and oleander from the surrounding countryside, and use them to line the narrow streets and alleyways, which are then decorated with flowers, and embroidered sheets are hung from the first-floor windows.

At 11 a.m. there is a Mass in the church, and then the symbolic body of Christ is borne by the faithful through the streets, stopping to pray at little home-made shrines on the way, and flower petals are thrown like confetti.

We skipped the Mass and headed up to the castle, which frankly looks better from a distance, although the views over the olive groves, the mountains and the lake (actually a man-made reservoir) are worth the steep climb.  It was built by the Moors and later used by Napoleon's troops, but these days only the central tower remains.


We returned to the square in time for the end of the procession, as it passed back into the church to be joined by children taking their first communion, all dressed in white like miniature brides.


In the afternoon there was live music and dancing in the town square, and the various bars and restaurants were doing a roaring trade.  I was impressed by the fact that they didn't jack up the prices (just 1€ for a beer) and we enjoyed a very respectable three-course menú del día for 10€ at the Hotel Arco de la Villa, in a table by the window overlooking the lake.

All in all, Corpus Christi in Zahara a very friendly, intimate little festival, not at all solemn and not overrun with tourists, and the village is definitely worth a visit at any time of year. 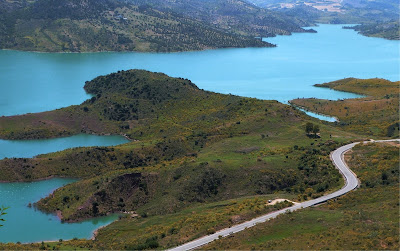 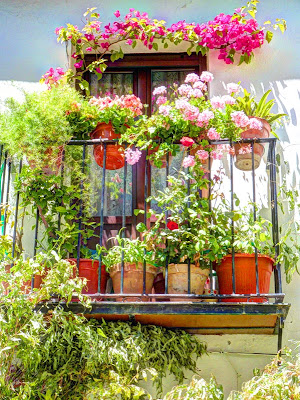