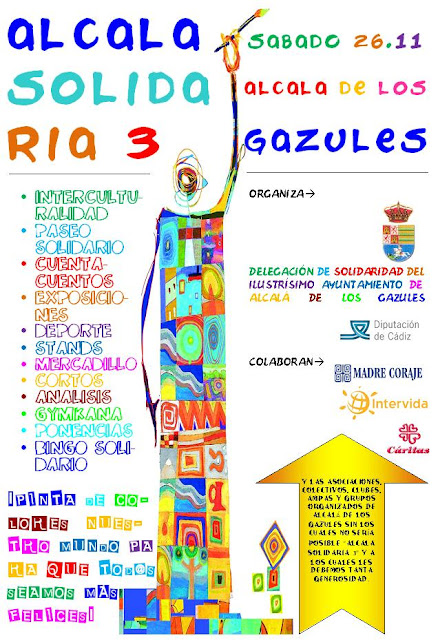 It is well known that the poor give proportionally more of their income to charity than the rich do, probably because they are more attuned to the needs of others.  This was demonstrated beautifully in Alcalá yesterday when, despite the economic crisis, alcalainos of all ages thronged the Paseo de la Playa  for the town's third Día Solidaria.

Although solidaridad translates literally as "solidarity" it has a wider meaning in Spanish, embracing sharing, community, empathy, compassion and equality.  The English equivalent would be "charity", but in Spain caridad is more usually associated with aid offered by religious institutions.

The Playa was lined with stalls offering goodies for sale, the proceeds going to various fundraising activities.  The Fair Trade (Comercio Justo) stall had bottles of 40% proof Cuban rum nestling amongst the organic chocolate bars, and the nuns from the Beaterio had a bric-a-brac stall piled with china ornaments, ashtrays, cups and saucers, some of which looked like candidates for the Antique Road Show.

AMAG, the town´s equivalent of the Women´s Institute, sold a range of "typical English" cakes, biscuits and sausage rolls donated by us Brits, with proceeds going to breast cancer research.   Despite suffering somewhat in the warm sun, apparently they were all sold (and no, we didn´t buy them ourselves).

As ever there were plenty of activities for the kids; a solidarity procession, a solidarity train, a solidarity football match and even a solidarity gymkhana.  The students from the Sainz de Andino secondary school each donated a euro towards the preparation of an enormous paella, cooked by staff and parents and sold off to passers-by to raise money for the annual visit of children from Western Saharan refugee camps.  Meanwhile the team from the Adult Education Centre offered more traditional local fare of gazpacho caliente and tagarninas y garbanzos.   To finish the day, the Asociación de Inmigrantes Áve Fénix organised a few games of Bingo Solidario.

Changes on the Alameda 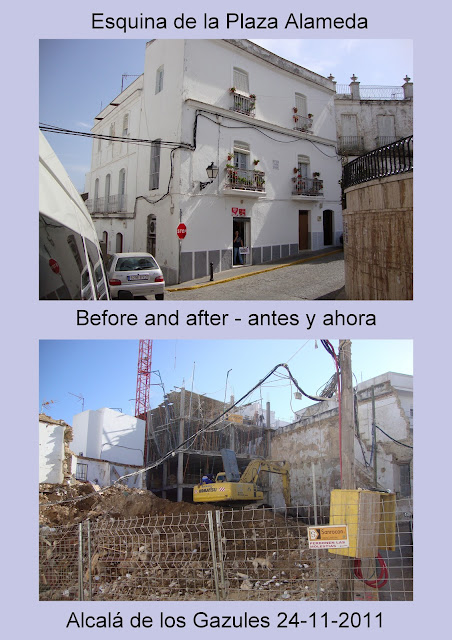 It can't have escaped your notice that the Spanish economy is in a right mess.  Unemployment is 21% and rising, and under-25s have barely a 50-50 chance of getting a job.  The interest rate on government bonds is approaching Italy's, making us the S in PIIGS.  Some cities are so deep in debt they can't pay their staff. Government spending cuts are biting deeply into health and education services, and public employees have had their salaries cut.  Families who took out mortgages during the boom years and have now lost their jobs are being evicted at the rate of 15,000 a month, while up to two million dwellings stand empty.  Small businesses are going to the wall on a daily basis, especially those dependent on public contracts.

In last Sunday's general election, the voters demonstrated unequivocally who they blame for this sorry state of affairs. The PSOE (Partido Socialista de Obreros Españoles), which has been power since 2004 under the leadership of Jose Luis Rodríguez Zapatero, saw its share of the vote fall from 44% to 29%, its lowest ever since democracy was restored after the end of the Franco dictatorship in 1976. The right-wing PP (Partido Popular) "swept to victory" with a large majority and an even larger avalanche of clichés.  The political map of Spain is now almost totally blue, apart from red blobs in Seville and Barcelona and a few separatist enclaves in Catalunya and the Basque Country.


The campaign slogans for the two main parties were a sick joke.  "Pelea por lo que quieres!" (Fight for what you want!) declared the avuncular Alfredo Rubalcaba on the PSOE posters.  How meekly his party rolled over on its back when confronted with the bared teeth of Angela Merkel and the IMF, signing the Euro Pact and committing the country to austerity measures and privatisation!  How they wrung their hands with remorse while cutting 5% off teachers' wages, while dithering endlessly over whether or not to raise taxes for the wealthy!  No, sorry Alfredo, we aren't buying that one. 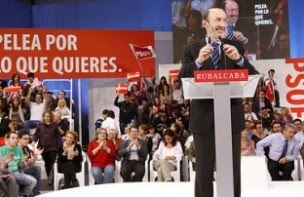 And the PP's "Súmate al cambio!" (Take part in the change!) was even more of a hoot. Change there will most certainly be, but what it will consist of we can only guess. Their slightly disturbed-looking leader, Mariano Rajoy, must be unique in contemporary Western politics for having won a landslide victory without declaring a single detailed policy in advance, other than the vague threat of more austerity measures and the even vaguer promise of more private sector jobs.  "There are difficult times to come", he said in his victory speech.  To come?  You mean they haven't arrived yet???

Meanwhile back in Alcalá de los Gazules we lefties have a tiny glimmer of consolation.  The municipal elections last May left us with an unholy alliance of the IU and the PP, an absentee mayor and a deafening silence from the Town Hall ever since (other than the occasional squeak about the mess left by their predecessors).  The electorate turned out in the pouring rain on Sunday to restore the red flag over the cuña de socialismo andaluz - making Alcalá one of just a handful of towns in Spain where the PSOE returned a majority.  Overall this makes not a jot of difference, of course, but it made me feel a bit better. 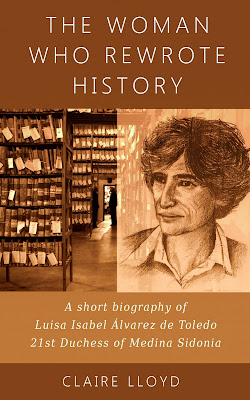 I've just finished writing a short biography of a woman who first captured my imagination after I read an article about her in La Luz Magazine a few years ago.   She lived in a palace in Sanlúcar de Barrameda and although I am not normally a fan of duchesses I have become rather fond of this one, as she swam against the tide all her life.

Luisa Isabel María del Carmen Cristina Rosalía Joaquina Álvarez de Toledo y Maura, Isabel to her friends, was the 21st Duchess of Medina-Sidonia, one of the oldest aristocratic families in Spain. She left her husband  after having three babies in quick succession and then deposited the children with her grandparents while they were still small.  She became known as the Red Duchess (la Duquesa Roja) because of her political convictions.  She organised strikes amongst fishermen and vineyard workers, campaigned for compensation for locals affected by a nuclear accident, was imprisoned under the Franco regime, gave away property to build housing for the poor, and started a school for local children in the Palace.   She drank in the local bars, wore men´s clothes and smoked like a chimney.  She is still fondly remembered in Sanlúcar as "la Duquesita". 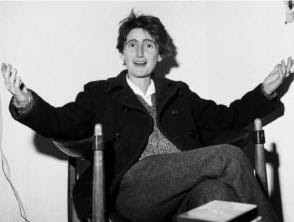 A prolific writer and a controversial historian, Isabel inherited one of the largest private historical archives in Europe.  She dedicated her life to its organisation and preservation and set up the Fundación Casa Medina Sidonia to ensure it would be made freely available for historical research.   She found evidence in the archive that the Moorish sailors discovered America before Columbus and that her ancestor Guzmán el Bueno, hero of the Christian reconquest, was a Moor.  Controversial to the end, on her deathbed she married her female companion and secretary so that the archive, the Palace and its contents would not be divided amongst her children, who remain convinced that she deprived them of their inheritance.


Isabel was the product of generations of aristocrats, politicians, historians, warriors and controversial figures. Despite her strong belief in social justice she never renounced her titles, and is it intriguing to ponder what she saw as the role of the nobility in contemporary Spain, and where she saw herself within that structure. Certainly her titles protected her from almost certain execution following her outspoken criticism of Franco, but she retained them long after his death. How did she resolve the apparent contradiction of passing on the line of Spain's oldest dukedom with her professed Republicanism? Was her devotion to history and her family's place in it stronger than her political conscience? Did she believe in noblesse oblige, the responsibility of the privileged to the less fortunate?  Why, as an outspoken campaigner for civil liberties, did she keep quiet about being a Lesbian?  Why, as a lifelong atheist, did she call for the last rites on her deathbed?

You can download the full work or read it online here:   The Woman Who Rewrote History

The Palace is open to the public and there are nine beautiful guest rooms around the courtyard garden where you can stay in Renaissance splendour from €70 for a double room including tax and breakfast.  Details here:  Hospedería