Sandias, Galias and Skin of Toad

It's the melon season.  The local shops are full to bursting with great green globes, rolling off the counters and piled up on the floor. Men with van-loads of them are knocking door to door. Little old ladies totter out of the greengrocer's with a carrier bag in each hand, containing watermelons that weigh almost as much as they do.


Melons have been enjoyed by humans for at least 4,000 years.The Prophet Muhammad is reported to have said: "Whenever you eat fruit, eat melon, because it is the fruit of Paradise and contains a thousand blessings and a thousand mercies. The eating of it cures every disease." The word is probably derived from Melos the Greek Cyclades Island best known for the Venus de Milo).

All melons come from the Cucurbitaceae family. They are closely related to cucumbers and squashes, but due to their sweetness they are used as fruits rather than vegetables. Apart from the watermelon, the many varieties around today are cultivars of the muskmelon, Cucumis melo. These melons probably originated in the hot valleys of southwest Asia - specifically Iran (Persia) and India). They have never been found growing in the wild, other than escapees from gardens.

The watermelon (Citrullus lanatus) is originally from southern Africa, where it does grow wild.  There is evidence of its cultivation in the Nile Valley from the second millennium BC, and watermelon seeds were found in Tutankhamun's tomb. It was bought to Spain, along with many other goodies, by the Moors.

Spain is the world's largest exporter of melons, growing over a million tonnes a year, and produces nearly 50% of the melons consumed in Europe.  The main cultivation areas are the provinces of Cuenca and Ciudad Real, Almería, Murcia, Extremadura, the provinces of Valencia and Castellón, and the Madrid region.

The main varieties grown in Spain are:

Galia, a sphere-shaped fruit with a rough skin, bright yellow when ripe, greenish-white flesh and an exquisite aroma.

Charentais, a French variety, round with a pale green striped rind and fragrant orange flesh.

Cantaloupe, sphere-shaped with a ribbed grey-green skin and fragrant orange pulp, with an intense aroma. The European canteloupe differs from the American variety with its net-like webbing.

Honeydew, a winter melon which can weigh up to 3 kg, is an elongated shape with yellow rind and sweet, slightly crunchy yellow flesh.

Tendral is another winter variety, rounded or elongated in shape, with a rough, dark green or black rind and sweet pale flesh.

Watermelon, or sandia as it is known here, is extremely popular and is grown in practically every kitchen-garden across southern Spain. They can grow to a huge size. The rinds can vary in colour from pale to dark green and the rough flesh from crimson red to bright orange. Seedless varieties are being developed.

Last night was one of those soupy, humid August nights you get in Alcalá when there is no wind to stir the air and the white buildings, like giant storage heaters, release the heat they absorbed during the daytime. As soon as it got dark we dragged ourselves down to the Paseo de la Playa for a beer, and sat outside Siglo XXI chatting to the owner, Manolo, about the UK riots which he mistakenly believed marked the beginning of the English Revolution.

As usual on a Saturday night  the whole town was out; small children raced up and down the Playa on their rollerblades and tricycles, teenage girls were dressed to kill in their micro-skirts and six-inch heels, their male prey chatted to each other pretending not to notice, while their parents and grandparents clustered round tables in front of Pizarro's Restaurant in large noisy groups, putting the world to rights.

Suddenly we heard shrieks and shouts from the direction of Pizarro's.  Children were sprinting in all directions and ladies of all ages were leaping to their feet.  Manolo ran indoors and grabbed a broom, then legged it up the Playa.  We wondered what on earth was going on - had someone won the lottery?  In which case, why the broom?

Then, swift as a greyhound, a large rat ran past us, pursued by the prime of Alcalá´s manhood en masse.  It was like the San Jorge bull run in miniature.  The fearless rodent veered left, heading for the park, and out of our sight. Shortly afterwards we heard loud cheers, and deduced that Ratty had met his inevitable fate. 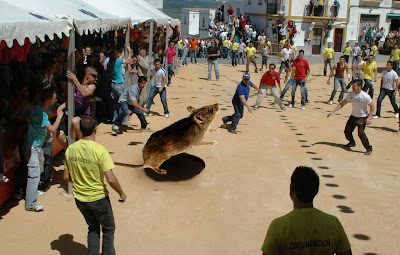