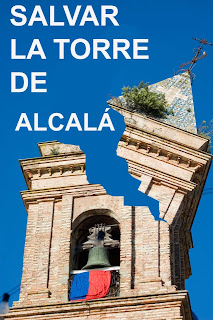 I'm not normally one for national stereotypes, but the Spanish do tend to exhibit a marked aversion to Planning Ahead.   This manifests itself in many ways, from the current banking crisis to the way they double-park. When it's in the way, I'll move it.   When there's a problem, I'll solve it.  When it breaks, I'll mend it.  In the meantime, why worry?

But some alcalainos are worrying, and with good reason.   Alcalá's crowning glory, the bell-tower on the church of San Jorge in the Plaza Alta, is about to fall down.

The church, which was declared Bien de Interés Cultural (object of special cultural interest) in 2006,  was built in the 16th century on the site of an old mosque.  The baroque-style tower was added in 1637.  It contains four bells, and is crowned by a pyramid covered in blue and white ceramic tiles, topped with a wrought-iron cross.  It dominates the skyline for miles around, changing colour with the light - you can see the tiles sparkling in the picture at the top of this blog.  It is a favoured roost for the local population of lesser kestrels who circle round it on summer evenings.

Some years ago a stray seed from a tree-tobacco plant, Nicotiana glauca, also decided to make the tower its home.  It has been growing steadily, and has now reached the size where if it were in your garden, you'd need a good shovel to dig it up.  The cracks in the tower are getting larger and larger, and still nobody is doing anything about it.  Rumour has it that the Town Hall says it's the Church's responsibility, and the Church says it's up to the Town Hall.  They both claim to have no funds available.  The sum of €99,760 for repairs to the Church was listed in the 2009 budget, but unfortunately nobody saw fit to climb the tower and blast the wretched weed with Roundup before it got too big to remove without causing major structural damage.

When the inevitable occurs and bits of this precious landmark start falling off, perhaps something will get done. Or perhaps not. I just hope the mayor or the bishop, or ideally both, have parked their car under it when it happens. 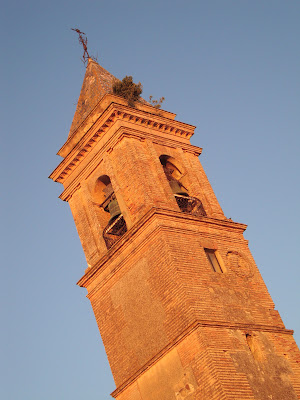 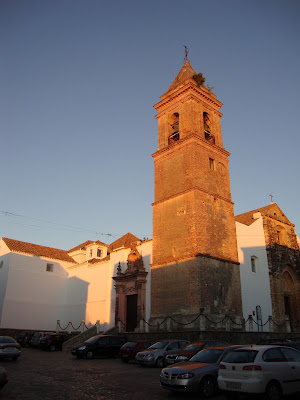 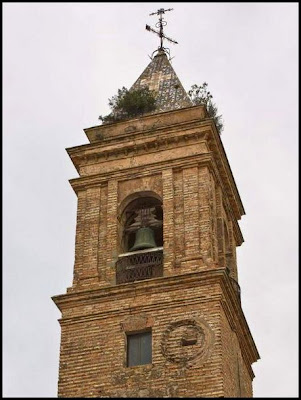 Corpus Christi: the body of Christ, flavoured with rosemary 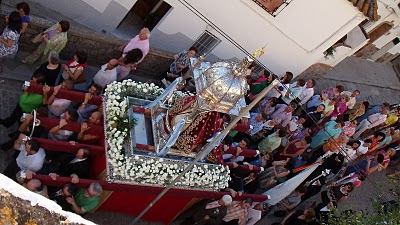 This week Alcalá celebrates yet another religious festival; Corpus Christi, literally the Body of Christ, proclaiming the transubstantiation whereby bread and wine change into the actual body and blood of Christ during the Eucharist.  Masses are held at both of the town's churches and at the Santuario, and tonight there will be a procession, bearing the Holy Host enshrined in silverware through the narrow streets, accompanied by our inimitable silver band.

Corpus Christi is a moveable feast, meaning that it takes place on a different date every year; the first Thursday after Trinity Sunday, which is the eighth Sunday after Easter.  It started in 1208 when a Belgian nun had a vision of a moon half covered by cloud, which she interpreted to mean that God was unhappy that the Eucharist was not celebrated on earth. In 1246, the Bishop of Liège approved a Eucharist celebration in his diocese, which Pope Urban IV then extended to the rest of the Catholic Church in 1264.

Every town and village in Spain celebrates Corpus Christi, and the festival usually lasts for four days.  The biggest and most extravagant event is in the city of Granada, where it coincides with the annual feria.  This week-long binge was used by the Catholic rulers after the Reconquista to help "Christianise" a population that had been under Muslim occupation for more than seven centuries.  With festivals as the carrot and the Inquisition as the stick, their mission was quickly accomplished.

It is traditional before the procession to carpet the streets with greenery.   In Zahara de la Sierra, a beautiful hill-town between Alcalá and Ronda, they use all sorts of aromatic herbs, thyme, rosemary eucalyptus, oleander and palm leaves.  The Zahara festival is quite spectacular, and has the status of Fiesta de Interés Turístico Nacional.

In Sitges (Cataluña) they decorate the street with flower petals, forming elaborate patterns.  (They clearly don't get the Levante up there ...)

In Alcalá they scatter rosemary on the streets.  There were two big sacks of it in Dominguitos when I went in for coffee this morning.  I'm not sure of its significance for Corpus Christi, but  it does have religious symbolism. The Virgin Mary is said to have spread her blue cloak over a white-blossomed rosemary bush when she was resting, and the flowers turned blue. The shrub then became known as the 'Rose of Mary' .  It was also burnt as incense in some Roman and pagan ceremonies.

Some photos of previous years' Corpus processions in Alcalá, from the Spanish blog Mi Alcala: 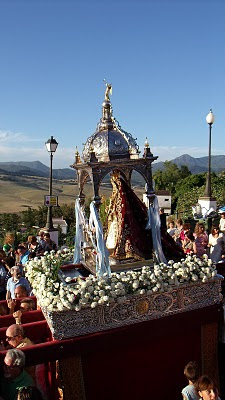 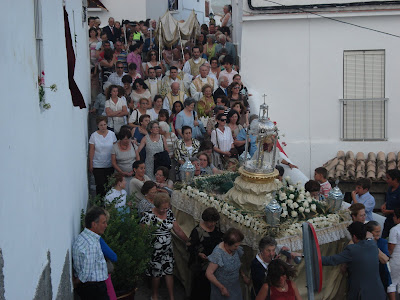 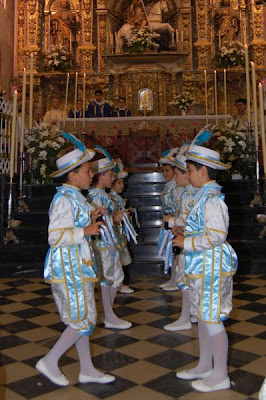 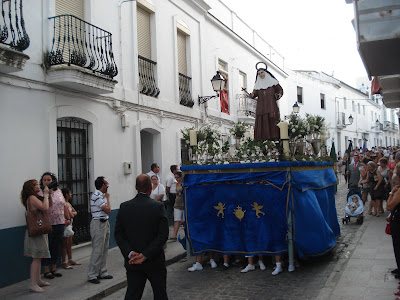 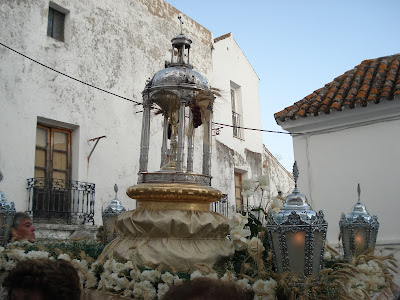 Here are a couple of videos of songs from the new CD 25 Años del Coro Amigos del Camino, commemorating the 25th anniversary of the choir of Alcalá's "Friends of the Camino" club.

This one, Alcalá Mora (Moorish Alcalá) has some lovely views of the town.


This one celebrates our famous local dish, hot gazpacho!