So the polls were wrong!

Two days ago everyone was predicting that the PP would take control of Andalucía.

Well, it didn't happen. They needed 55 seats for an absolute majority in the Junta de Andalucía Parliament and only managed 50. The Socialists (PSOE), who had been in power since the Junta first came into being 30 years ago, got 47, and the IU-V (United Left + Green Party) doubled their vote from 6 to 12 seats and now hold the balance of power. The Andalusian independence party (PA) and the peculiarly apolitical UPyD didn't get any.

Twice as many disenchanted PSOE voters defected to the left than to the right.


WIll the PSOE and IU form a coalition and keep the red flag flying down here in the south?  Watch this space ... 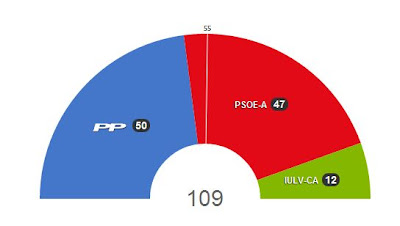 To check results for individual locations in Andalucía go to http://resultados.elpais.com/elecciones/2012/autonomicas/01/index.html

Blowin' in the Wind

There are some days when you can't bring yourself to turn on the TV or read the papers because you know the news is going to be bad.  Tomorrow is going to be one of those days.  Andalucía's regional elections take place today, and the right-wing Partido Popular (PP) are predicted to win with an absolute majority.  For the first time in its 30-year history, the Junta de Andalucía will not be run by the Partido Socialista de Obreros Españoles (PSOE) and our flagship health and education systems will be hacked to pieces in a wave of savage spending cuts.

Here in Alcalá de los Gazules, where last year the PP formed an uncomfortable pact with the Izquierda Unida (United Left) in order to oust the PSOE, the situation would be comic if it weren't so tragic.  The eerily invisible Mayor, Julio Toscano, decided to use the money in the town's coffers to pay off a bank loan rather than pay seventy council workers their January and February wages or settle the accounts of numerous small businesses who provide goods and services.  He has now been forced to apply to the Diputación de Cádiz for a €200,000 advance on 2012 council tax revenues, and is also negotiating a new €400,000 bank loan to pay the bills.  So much for good  housekeeping ...

Meanwhile his PP colleague Estela Sánchez, Councillor responsible for education and having fun, raided the kitty to treat the town's schoolteachers to a Laughter Therapy workshop and is promising that the bulls will run and the booze will flow as usual at the forthcoming Festival of St George.

Two major inrastructure projects in the town - the widening of the treacherous 2 km stretch of the A2304 from the Prado to the Patriste turn, and the stabilisation of the precariously-positioned blocks of flats in the Barrio San Jorge (known as El Lario) - have suddenly slammed to a halt.  According to the local paper, the Ayuntamiento are claiming that the Junta de Andalucía suddenly cut the funding for these projects without telling them, for "sectarian reasons" because it disapproves of the IU-PP Pact.

A block of flats built under the VPO (affordable housing) scheme during the PSOE's reign has been standing empty for over a year because of problems with an overhead electrical cable.  The flats, in C/ Río Álamo (behind Día supermarket) has only just been hooked up to the mains - but instead of apologising to the people on the waiting list or lamenting the loss of a year's rental income, the "Derecha Unida" (United Right, as the coalition are now known) have grabbed the opportunity to blame the previous administration for its incompetence.

The blame game is where most of their energies seem to be going, unfortunately.  Games of verbal ping-pong with ever more acrimonious mud-slinging between the IU and the PSOE can be followed on Facebook and in their respective newsletters Al Viento and Actualidad Socialista.   It's childish, pointless and frustrating to watch them behaving like a bunch of kids when they should be uniting to oppose the cuts and help the 1,000 unemployed citizens of Alcalá get work.


And as if things weren't bad enough, the Levante is blowing furiously and is forecast to blow all week, so I can't even go out and enjoy the spring sunshine ... 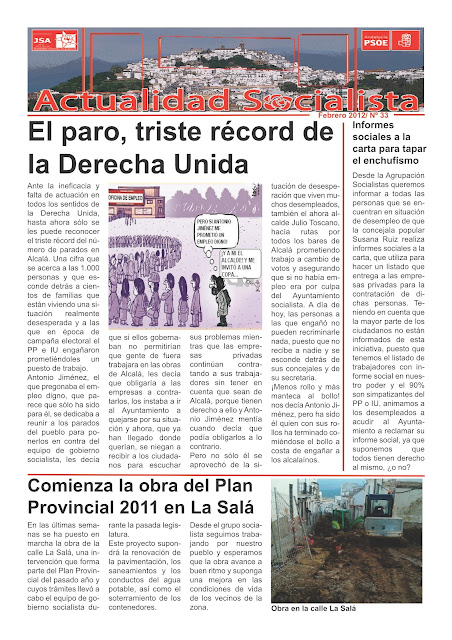 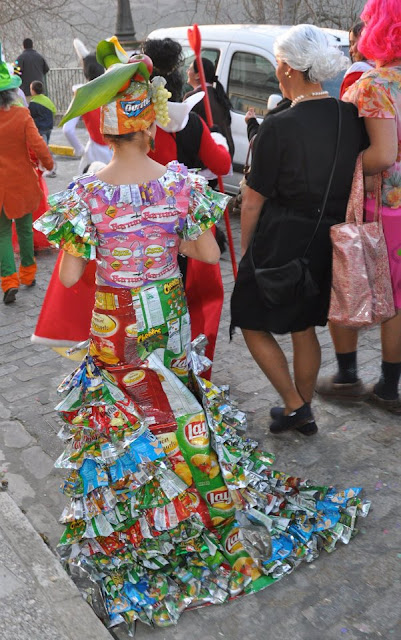 Carnaval is my favourite of all the festivals and fairs here.  The whole town is involved, families come out together to enjoy themselves, everyone has a good time (except perhaps the targets of the chirigotas' ruthless satire), and there is no religious subtext.

The fancy dress parade is great example of how creative the alcalain@s can be without spending a lot of money - a flamenco dress made of crisp packets?  Ingenious!

Thanks to Chemary Gómez Reyes for some of the photos.  You can subscribe to his YouTube channel CHEMARYALCALA for lots more videos of Carnaval and other events in Alcalá de los Gazules. 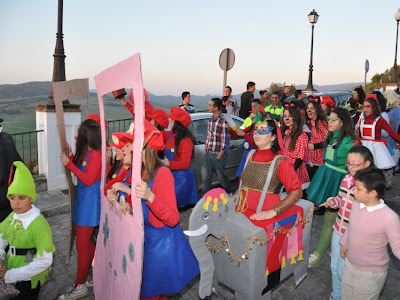 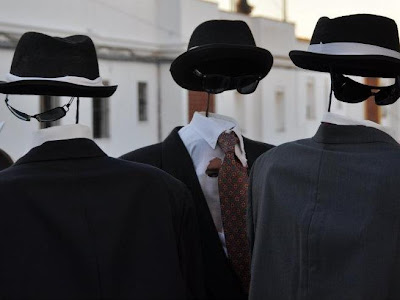 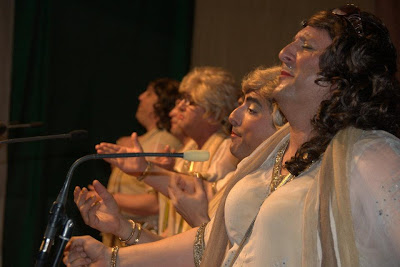 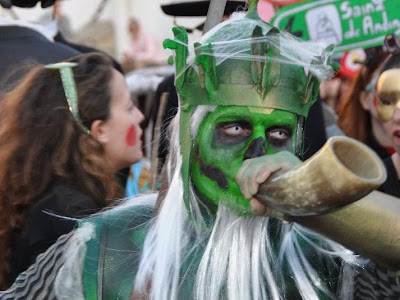 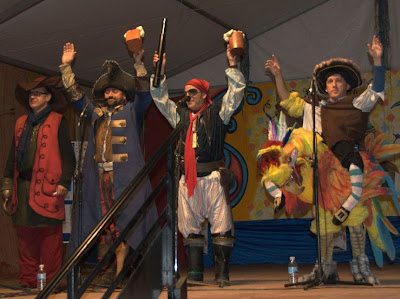 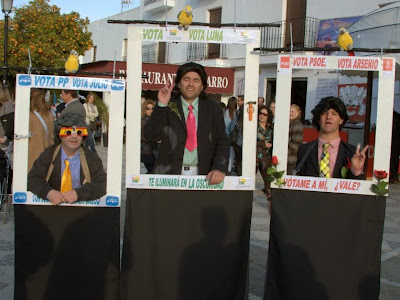 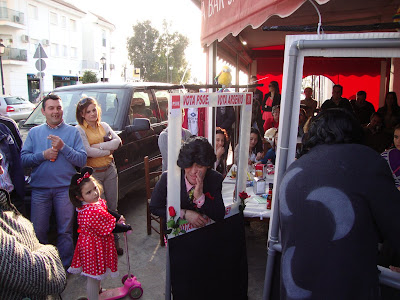 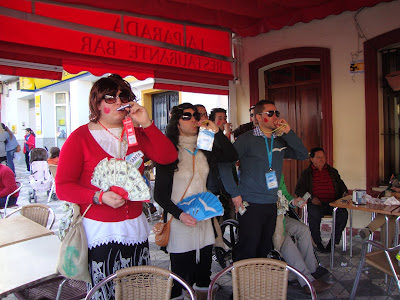 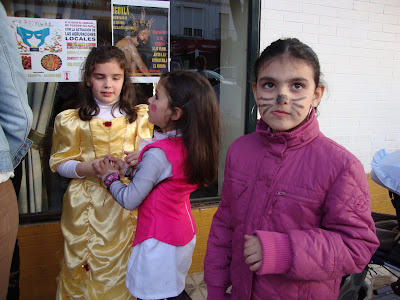 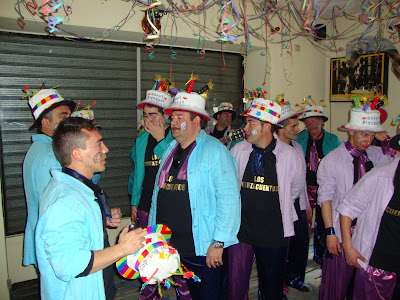 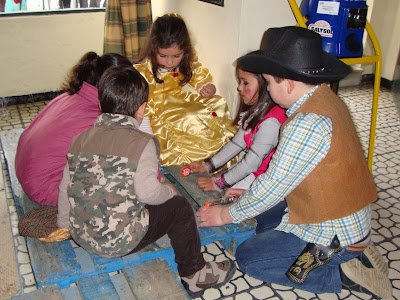 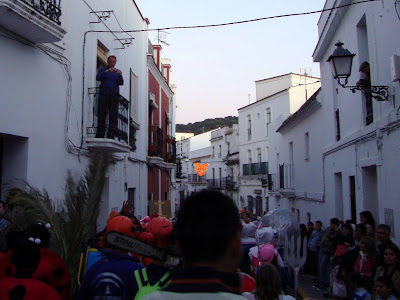 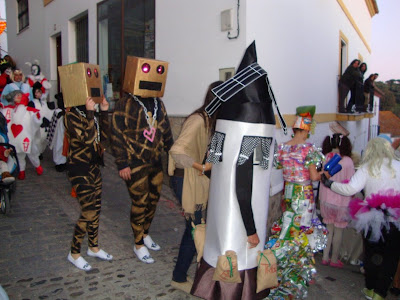 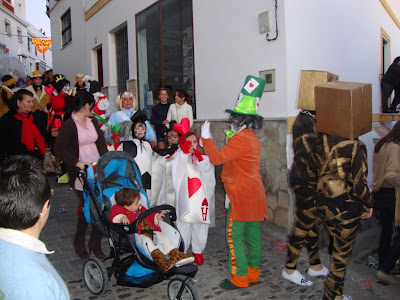