As we approach week 6 of confinement in an effort to stop the spread of a deadly virus, it seems timely to take a look at another virus that devastated the population of Alcalá over two hundred years ago, killing over a fifth of the population. Information on that epidemic comes from an article in Spanish by Ismael Almagro Montes de Oca on his blog Historia de Alcalá de los Gazules.

Yellow fever is spread when a mosquito feeds on blood from an infected person and transfers the virus to its next meal.  However at the time of the 1800 epidemic in Spain contagious diseases were believed to originate in "miasmas", toxic vapours emanating from decaying matter, then passed directly from one human to another.  Viruses were not identified until the late 19th century, the first vaccines arrived soon after, and the discovery of the role of the mosquito in propagating yellow fever was made in 1900.

Symptoms of yellow fever start to appear within about five days.  These include fever, nausea, headache, muscle pain and vomiting. Most people recover after a few days but around 15% move to a second, far more dangerous stage with liver damage and gastrointestinal bleeding. Once jaundice sets in the skin turns yellow, giving the disease its common name. It is also known as vómito negro in Spanish, due to bloodstained vomit. 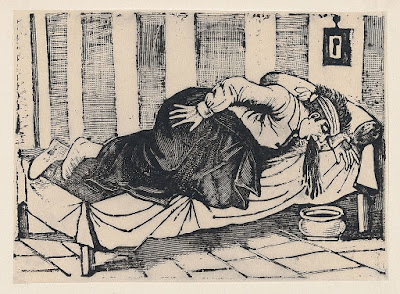 The virus originated in Africa, probably passing from primates to humans, and the mosquitoes which carried it were transferred to the Americas and the Caribbean via slave ships when mosquitoes bred in kegs of water stored on board. The first recorded outbreak was in the Yucatan Peninsula in 1649 and it gradually spread northwards into the USA via river or coastal traffic. In Philadelphia in 1793 it killed 5,000 people, ten per cent of the population. Large numbers of British soldiers sent to Haiti in the 1790s succumbed to it, and it also ravaged Napoleon's troops sent there in 1802 to suppress the slave revolt. The virus found its way into Europe in the 18th century via ships arriving in Spanish and Portuguese ports from the Americas.  In 1730 there was an outbreak in the port city of Cádiz with 2,200 reported deaths.

The epidemic which devastated Alcalá along with the rest of southern Spain in 1800 was probably down to a ship from Cuba which docked in Sanlúcar de Barrameda on 30 June. Several crew members had died during the crossing; others made their way to the capital and elsewhere in the province.  As it had not been seen in the area for 70 years local doctors were unfamiliar with the disease and did not know whether it was contagious or seasonal. They treated the symptoms as best they could but did not immediately raise the alarm bells, so valuable time was lost in stopping the spread.

On 29 August a letter reached the Ayuntamiento of Alcalá de los Gazules from the Commander General of the Campo de Gibraltar, under whose jurisdiction Alcalá fell, ordering the cessation of all communications with the city of Cádiz in order to stop the disease spreading. This was read and approved by the town council at a meeting on 31 August.

The first steps taken by the council, as usual in the face of calamity, was to petition the town's patroness, Nuestra Señora de los Santos, to intercede and protect her flock.  However instead of making the usual pilgrimage to the Sanctuary where the Virgin resided, it was decided to bring her into Alcalá so as to avoid an influx of strangers.

Troops quickly arrived from the barracks on the Campo de Gibraltar and worked with residents to blockade all the entrances into the town. The containment measures were rigorously enforced, and notices were posted warning that the punishment for breaking the blockade was the death sentence.  Soldiers were authorised to use firearms or bayonets to stop anyone entering the town.  On 11 September a house in Patriste, La Gitana, was requisitioned as a quarantine station, and on 22 September further troops arrived to reinforce the cordon sanitaire.

But despite all these measures the number of cases in the town continued to rise.  Residents who owned property in the campo, including several councillors, moved there with their families to escape the danger.  The 12-bed hospital on the Plaza Alta, La Misericordia, struggled to cope with the increasing number of patients. In total 817 deaths were recorded in three months, out of a population of around 4,000.

This figure was much higher than in Medina (136) or Paterna (86). Clearly the virus had already been present in the town before the blockade was set up. The town's medical officer, José Sánchez Aznar, wrote in a report published in 1822 that early in the summer of 1800 he had treated two men recently arrived from Cádiz showing the typical symptoms, which he treated in the usual way, but he did not recognise the disease at the time. They both recovered but it wasn't until later that he realised they must have been contagious. Then he treated a man who had been sharing a hut in the campo with some muleteers; he did not recover, and soon afterwards most of his family fell sick and died.

It is more than likely that the muleteers, who travelled from town to town with their goods, were unknowingly carrying the virus. The doctor also reported that there was a period of exceptionally hot and humid weather at the time which he believed must have helped the disease to become more virulent. In those days the connection between yellow fever and mosquitoes was unknown but in retrospect it is possible that these weather conditions provided ideal breeding conditions for the insect.

As numbers of victims continued to rise it became evident that the cordon sanitaire was not working. At the end of September the Commander General issued a new order, punishable by a prison sentence, preventing people from inviting outsiders into their homes.  But the council was depleted because most of its members had fled to the country, and the mayor himself had given up his civic duties and locked himself into his house within the castle walls, only talking to people from upper-floor windows. The running of the town in its state of emergency was left to the few remaining councillors.  Houses vacated by those who had fled to the country were being looted and the bailiff pleaded with the mayor for more resources to guard them, but his pleas were ignored.  Eventually the mayor was held to account for his negligence and ingmominiously banished from the town.

The first victims of the epidemic were buried in the Pantheon where the Beaterio is now, next to the castle, but this quickly became impractical as the bodies were piling up.  Five mass graves were dug around the outskirts of the pueblo, using gunpowder to break the rock and prisoners to dig the ditches. 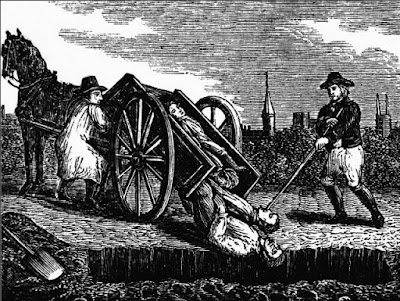 In 1900 research by the US military in Cuba proved that yellow fever was transmitted via mosquitoes, and soon afterwards the specific mosquito Aedes aegypti was identified as the carrier.  A vaccine finally came into use in 1938. 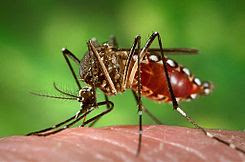