Diego Valle and the birth of socialism in Alcalá

Alcalá de los Gazules is known as the “cradle of Andalusian socialism” mainly because of the work of those who rebuilt the Spanish Socialist Workers Party (PSOE) in the dying days of the Franco dictatorship.  But its socialist history dates back to the 19th century, with the Agrupación Socialista  founded by Diego Valle Regife and his comrades in 1886.  It was only the second such group in the whole of Andalucía, and the first in a rural context. 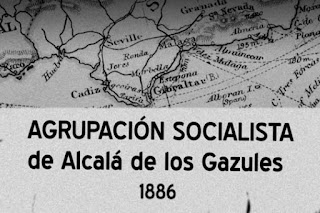 The first signs of workers’ organisation in Spain came with the foundation of the Asociación Internacional de Trabajadores (First International) in 1864, and the Glorious Revolution of 1868 which led to the rapid spread of anarchism amongst the agricultural labourers of Andalucía, reduced to the most miserable existence by the custom of only being paid for the days they worked. But their hopes for a brighter future would not last long, because the First International was banned in 1874, obliging the workers’ associations to go underground.

The first recorded instance of organisation in Alcalá was in March 1883 when, following a spate of crimes committed by the infamous Mano Negra, the authorities discovered a field-workers' union affiliated to the anarcho-syndicalist Federación de Trabajadores de la Región Española, founded in Barcelona in 1881. Nearly fifty men were arrested for belonging to an illegal organisation, but the judge could find no evidence of any connection with the Mano Negra, and the Mayor confirmed that they were all of good character, so they were released.

By March 1885 the number of affiliates had increased, and the association extended its remit beyond agriculture. The man in charge of administrative correspondence was Diego Valle Regife, one of those arrested in 1883.  They opened a Centre for Instruction and Recreation for the working class, aware that one of the best ways to promote their ideas was to fight against the illiteracy of the workers, most of whom had been obliged to labour in the fields from a very early age and had thus received no formal education.

However there is no further evidence of this association after October 1885. It appears from correspondence published in the newspaper El Socialista in January 1887 that many of the workers of Alcalá were abandoning the anarchist current, which they found too utopian, to follow the other current which emerged from the First International – socialism and political class action.


The committee at the head of Alcalá's socialist group, formed in December 1886, comprised several of the former anarchists arrested in 1883.  Diego Valle became President in June 1887.  Clearly a committed and articulate man, he was the local correspondent for El Socialista, graphically describing the working conditions of agricultural labourers in the town:

If the exploitation suffered by workers in manufacturing industries grows more insufferable by the day, imagine how the agricultural workers must suffer, not having, apart from a few exceptions, the backing of the association. Wages squeezed to the bare minimum, working days of 14 hours or more, and to top it all, the brutal and rude treatment by landowners and half-savage foremen; this is the picture of the miserable situation of the field workers, aggravated and sustained by the very position in which they find themselves, and which makes more difficult the concentration of their efforts to contain the excesses of the ferocious exploitation of which they are victims.

He wrote again in June 1887, this time signing the letter, as part of the campaign to reduce the working day to eight hours:

The bourgeoisie of this district exploits them scandalously; the working conditions could not be worse. The daily wage is miserable in the extreme, as they are considered fortunate to be earning 75 cents in exchange for working a 16 or 18-hour day. So the workers are agitated by continuous and unsuppressed misery, cursing the monopolist society and the thieves who squander the riches that they tear from the earth.

As you can see, comrades, this ground is not so abandoned that the seeds of socialism cannot bear fruit on it.  The way is open for our ideas, and in spite of so many obstacles which we have to fight against, we, the handful of revolutionaries who defend with love and energy the theories of Karl Marx, are confident of organising on solid bases the Agrupación Socialista in Alcalá de los Gazules, and we also hope that in a short time the neighbouring villages will join us in rallying round the flag of the Workers’ Party.


But there were further setbacks to come.  During raids on anarchist groups elsewhere, the Guardia Civil came across a reference to the Agrupación Socialista in Alcalá.  As a result, Diego was arrested at the cork-processing factory where he worked and taken by force to his house in Alcalá, where they seized the membership book and some correspondence. Other members of the group were then arrested and they were all taken to the jail in Medina Sidonia (curiously, not the jail in Alcalá itself).  They were then carted around the province, handcuffed and chained, via Chiclana, San Fernando, Puerto Real, El Puerto de Santa Maria, Jerez, Arcos, Ubrique and ultimately to Grazalema where the trial would be held - a journey of well over a month, treated like criminals and given barely enough bread and water to survive.

In Grazalema the judge ruled that they had committed no crime, as the socialist workers' party was not an illegal organisation.  They were released within half an hour, and had to find their own way back to Alcalá.  Nonetheless, a few weeks later other members of the group were arrested and given similar treatment.

The group dissolved temporarily, but soon reconsituted itself with a new committee, Diego Valle being re-elected as president. The revitalised group proposed organising societies of resistance for various trades - shoemakers, cabinet-makers, blacksmiths, cork-workers, wine-producers, farmers, builders and horticulturalists, and setting up a night-school to educate people over thirteen years old.   Diego Valle had already made his views on education known in the pages of El Socialista:

... The majority of workers here work in agriculture, they are somewhat ignorant and superstitious, qualities which they owe to the bourgeoisie. Attached to the old systems and almost totally lacking an education, it is not strange that among them fixed ideas don’t last, they are subject to a multitude of ever-changing theories which they experience when any passing orator approaches them and preaches four words empty of meaning.

Alcalá de los Gazules consists of 12,000 inhabitants. Education of women is undertaken by the Holy Mothers of the Sweet Heart of Jesus, whose establishment takes in all the young girls who have no resources to access any other form of education. At barely 15 years old they leave this sanctimonious place impregnated with religious fanaticism, deaf to humanitarian sentiments, and implacable enemies of the world and of the family.

The consequence of this appalling moral organisation is the ignorance of the working class of Alcalá who, ignoring the causes of their ills, continue to roll down the fatal slope on which religious sectarians have placed them. At the same time the Republican bourgeoisie itself, preaching a deceptive and seductive equality, continues to spìn this kind of nostalgia which overwhelms them.

The school opened in Calle los Pozos on 1 January 1888 and within two months had more than forty adults attending classes in reading, writing, grammar and arithmetic.  It was named la Escuela Regeneracíón, possibly as a way of restoring good relations with the leaders of the Partido Republicano Progresista, who had opened a masonic lodge in the town also called Regeneración.  There had recently been some biting criticism of that party's administration of Alcalá in El Socialista, and although anonymous, the finger was pointed at Diego Valle.  The President and Secretary turned up at the school, insulting and threatening him, saying that he was a traitor to the town.


The first few months of 1888 were especially hard for the day-workers because due to a lengthy period of heavy rain, they were unable to work and their families were starving.  On 29 March a group of them petitioned the mayor for assistance, but were told there were no funds available.  They then turned to the Socialist group, who interceded with the administation resulting in a payment of 50 cents per person per day, shared amongst more than 300 workers.  The Socialists also shared out the money they had reserved for a dinner to celebrate the anniversary of the Paris Commune.  But it was not enough, the daily rate was quickly reduced to 25 cents, and workers were reduced to begging from door to door.

From that point, there is no more documentary evidence of the Socialist group in Alcalá.  No more publications in El Socialista, and no representative at the PSOE First National Congress in August.  It is likely that, rather than being formally dissolved, it ran out of steam - partly because of a lack of funds, both within the party and among the workers themselves, and partly because its driving force Diego Valle left Alcalá to work in Jerez de la Frontera.  It was certainly still in existence in late September 1889, because it was declared an illegal organisation, and the municipal judge ordered the search and capture of 27 individuals who belonged to it.  Their names included all the various committee members as well as the former president of the anarchist group, Cayetano Rodríguez.

So maybe it is not surprising to see, on 13 October, a group of Alcalá families heading for Cádiz to board the steamship "Giana", bound the following day for Argentina.  They had dreams of setting up their own community there, "Nueva Alcalá", and the trip had clearly been planned for some time because there is evidence of passports and permits being issued for some of the emigrants.  Cayetano Rodríguez and his family were amongst them; they and most of the other families established themselves in the newly-founded city of Resistencia, in the Chaco district of Argentina, which welcomed thousands of European immigrants.

Diego Valle also emigrated at some point, but it is possible that on finding himself on the judge's hit-list he assumed the identity of his brother Eduardo.  Eduardo had certainly planned to emigrate, because his passport arrived in Alcalá on 12 November, but in fact he stayed in Alcalá and eventually became secretary of another workers' group in the early years of the 20th century.

In the Argentine port-town of Paraná, on the river of the same name, there is a record of one Diego del Valle whose year of birth coincides with that of the alcalaino.  Moreover, in the census documents for that place, the only one who filled in the box stating which religion they belonged to was Diego del Valle, who classified himself as Libre Pensador  - Free Thinker.