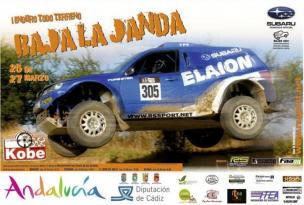 Back in January we spent our Sunday nights glued to the TV watching Jesús Calleja and the Spanish teams taking part in the Dakar Rally, bouncing across the dunes and deserts of Chile and Argentina in a series of unlikely-looking vehicles.  This weekend we had our own local version:  Baja Comarca La Janda - organised by RS Sport and Andinas Racing, and part of the Campeonato de Andalucía de Enduro Todo Terreno (All-Terrain Endurance Championships of Andalucia). 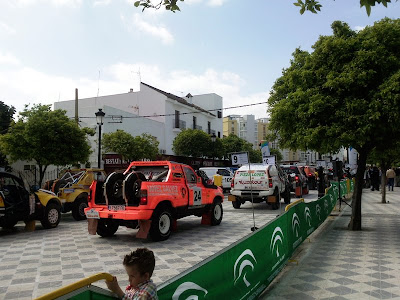 Thirty-nine teams took part, inlcuding some who had taken part in the Dakar Rally.  They lined up on the Paseo de la Playa on Saturday morning, before roaring past the bemused market shoppers towards the hills and valleys of La Janda - a route made especially challenging by the heavy rains we have seen in recent weeks.

The winners were José Antonio Hinojo and Israel Diego Gilabert from Almeria, in a Toyota Land Cruiser. 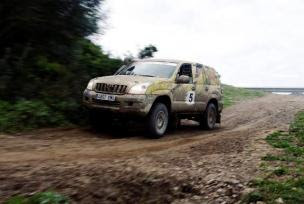 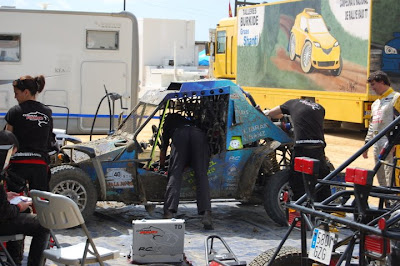 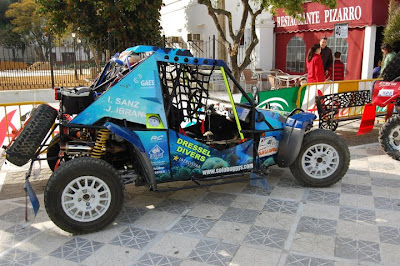 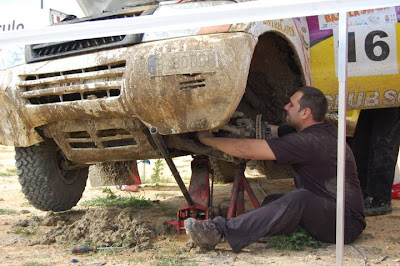 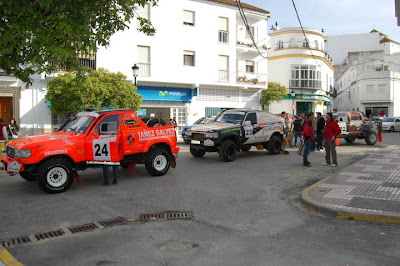 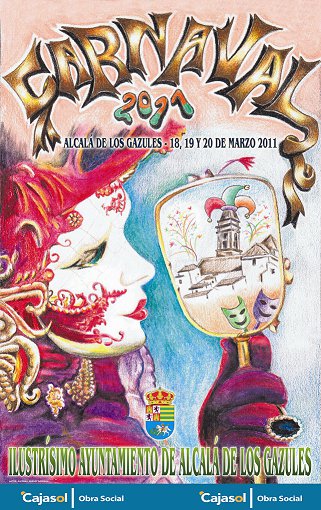 Unlike the last two years, the sun shone on Alcalá for this year's Carnaval.   The Playa was like a fairground;  the concerts in the marquee were packed; half the town dressed up in costume, and industrial quantities of paella, sardinas, chicharrones and tagarninas were cooked in the open air and served to the crowds.

Yesterday we watched the pasacalles del humor (humorous street parade), and it struck me yet again how wonderfully sociable, resourceful and fun-loving the Alcalainos are. This isn't put on for the tourists, or to make money - it is entertainment for the people by the people.  Check out this video if you can spare a couple of minutes, and you will see how infectiously good-humoured it all is:

The following history of Carnaval in this area, and how it survived Franco's attempts to clean it up, is extracted from an article by a writer who grew up in Alcalá in the 1930s.

Memories of Alcala 29: Carnival (translated from an essay by Juan Leiva)
The carnivals of Cádiz [Province] have taken the form in which we know them today since the year 1827. There were groups who wrote their own music and lyrics about the economic, political and social issues of the day. Until the onset of the Civil War, in 1936, they were celebrated without interruption. They even took place during the dictatorship of Primo de Rivera (1923-1930).

I have only vague memories of the Alcalá Carnival, because when they were banned I was only four or five years old. I remember my father singing some of the songs of the street musicians and singing groups from San Fernando, where his brother lived. His brother's children invited my father every year to spend a day at the Carnival in la Isla de León [San Fernando] because he loved to hear the singing groups.

However at the start of the Franco regime the carnivals were suspended. They were supposed to have been replaced with “Traditional Festivals of Cádiz”; a pale version of the real thing.  The Gaditanos [natives of Cádiz] did not accept the change, because there was censorship which prevented them exercising their freedom of expression. So they carried on in secret, harmonising their songs and ballads loaded with literary irony. 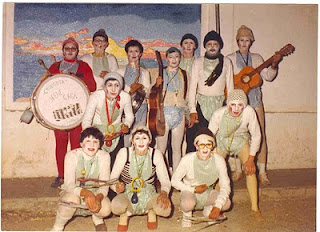 In 1980, democracy having been fully restored, carnivals recovered their true spirit and choirs, comparsas and chirigotas flourished in all the towns of Cádiz province. Alcalá also contributed to the carnival celebrations, with a chirigota called “Los Legionarios”, performing in the Cine Andalucia. In 1981 the Alcalá group “Los Esparragueros” [the asparagus-gatherers] distinguished themselves in Cádiz, winning the 4th Provincial Prize. They were a chirigota, with words, music and arrangements by Juan Sánchez Suárez and directed by Domingo Ruiz Ruiz. With this group, Alcalá managed to get itself listed among the most distinguished names, something very hard to do in Cádiz.

It must be remembered that carnivals became established in Alcalá, as in the rest of the province of Cádiz, very early on. In Spain, the heyday of carnivals was the 19th century; in Madrid and Barcelona, for example they have the burial of the sardine. But Cádiz and Santa Cruz de Tenerife are the most traditional of Spanish carnivals. It is an ingenious tradition to liberate the people from the pressures of work, family responsibilities, the economy, politics and even religion. The most surprising thing is that, the masks and disguises are not there to conceal mistrust, vengeance or delinquency. When that happens it is due to outsiders interpreting it wrongly. In Cádiz and its Province, they are a camouflage only for humour, wit and irony.

"!Don Carnal llega!" the headline in our local paper announced last week.  It's carnival time!  Like New Orleans, Rio de Janeiro and Trinidad, Spain shakes out its feathers at the passing of winter with a flamboyant celebration of Martes Gordo - Mardi Gras or Shrove Tuesday.   Most Spanish towns celebrate carnaval with parades, lavish costumes and non-stop partying; Tenerife and Sitges are among the most flamboyant.  Some of them go on for a week or two.

The excesses of carnaval are intended to prepare us for Cuaresma (Lent)- forty days of abstinence from the pleasures of the flesh.  The word probably comes from the Latin carnem levare, to put away meat, or carne vale, farewell to the flesh.  Like so many Christian customs, the feast evolved from a pagan ritual: lupercalia, a time for spring-cleaning and spiritual purification, which took place in mid February.  In Britain, all that survives  is pancake-tossing (and even that makes the Health and Safety people twitchy these days).

The first reference to Don Carnal, ruler of the festivities, appears in a book from 14th Century Spain entitled El Libro de Buen Amor.   Written in 1330, it records in verse some of the best loved stories and traditions of the time, including a battle between Don Carnal and Doña Cuaresma, excess versus austerity, a satire on the church and the excesses committed by some of the clergy.

But down here in Cádiz we have something quite unique, as well as the costumes and parades.  Gaditanos are famous for their wit, a bit like Scousers (Liverpudlians) are in the UK, and Cadiz Carnival has a tradition of satirical, witty and sometimes scandalous songs, or cuplés, usually aimed at the rich and powerful or referring to topical events, performed by groups of singers and musicians in costume.

The Teatro de las Fallas hosts a contest for the best acts, involving several weeks of eliminatory heats.  There are four main categories:  chirigotas, cuartetos, comparsas and coros.   Every town in the Province sends in their best groups, or agrupaciones, and the heats are broadcast live on TV. Prizes are awarded for the best lyrics, the best costumes and the best musical arrangements for each category.

On the weekend after the finals, hundreds of thousands of people take to the streets of Cádiz, many in costume, to watch the groups parade round the streets on the backs of lorries, and perform in the bars and plazas throughout the town.

The groups are traditionally all male, but this year the Asociaciones de Mujeres de Cádiz made an appearance on 8 March (International Women's Day) with a feminist cuplé (song) - death to machismo! 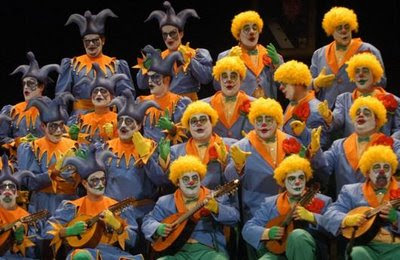 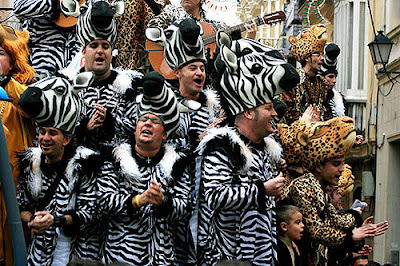 Following the Cádiz event, the groups go out and perform at local carnavales in towns all over the Province.  Alcalá´s takes place on 18-20 March this year and I hope to post some photos and video clips next week. 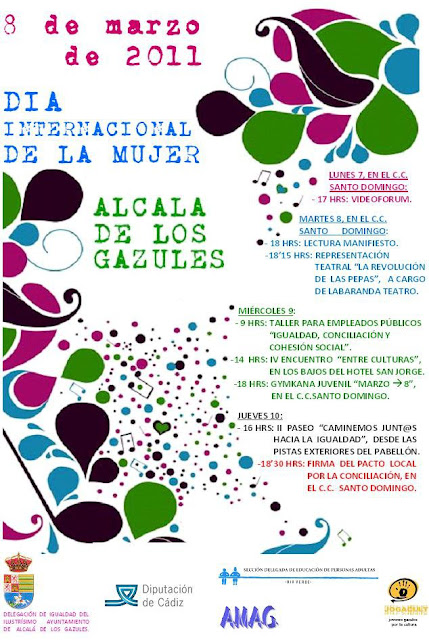 Alcalá being the birthplace of Spain´s first Minister of Equal Rights, Bibiana Aido, the townswomen take International Women's Day very seriously.  Just as Alcalá's St George's Day celebrations are spread out over three days, so events for the the Día Internacional de las Mujeres (8 March) ran from Monday till Thursday, ranging from from workshops on equality in the workplace to a "juvenile gymkhana".

AMAG, the Asociación de Mujeres de Alcalá de los Gazules, has members of all ages and social backgrounds, and organises social, charitable and educational events throughout the year.  They are especially keen to reach out to the town´s fifty or so resident foreigners, ourselves included.  Last year we were invited to speak to several dozen alcalainas about why we had moved here, and also about women´s roles in our own countries.  This year was slightly less scary; they organised an "Encuentro entre culturas", a meeting between cultures, where we could all get together (chaps too), chat informally and sample home-cooked food.

The event took place in the lower function room of the Hotel San Jorge, and included an impressive display of old photographs put together by the Adult Education Centre, who also maintain the Ethnographic Museum in the Calle Rio Verde.  They included a lot of photos of people, rather than buildings and monuments, and it would be great if they put them in their online photo gallery (which sadly has not been updated since 2006).
The hosts were proud to show off their home-made comida tipica - local food - and we were treated to an overwhelming variety of tasty samples, from tortilla de esparragos (omelette made with potatoes and wild asparagus) to delicious braised pig´s liver.  But the starring role was played by a giant cauldron of gazpacho - not the chilled, smooth version you get in every tourist restaurant in Andalucia, but the hot kind, thick and filling, which was the staple diet of field workers for centuries.

How to make winter gazpacho (serves 50)
(This should really be done out in the fields, but it was raining.)