In the early 20th century in Alcalá de los Gazules, Antonio and María had five sons and a daughter.  Then in July 1936 the country was torn apart by a nationalist uprising and a civil war, which inflicted tragedy on this family as on countless others.  One son died at the Front in a bomb blast.  One escaped to France and never returned.  One was executed by firing squad.  One had to hide out in the hills for years. One, Miguel, spent most of his adult life in prison - this is his story.  Of the daughter, nothing is known except her name, Catalina.

"Miguelillo", born in 1915, was the youngest and most daring of the brothers.  He used to say he had so many narrow escapes on and off the battlefield he must have had his own guardian angel. The nickname Cartucho (rifle cartridge) was inherited from his grandfather, who as a boy had liked to hide and explode cartridges to frighten the girls.  Miguel adopted it when he joined the Resistance and it was too dangerous to use your real name.

Miguel was a member of the CNT, an anarchist union with a large following among the exploited agricultural labourers of Andalucia.   After the July 1936 uprising, members of the CNT were high on the fascists' hit-list. Miguel fled with many of his colleagues to hide out in the rough scrubland and forest in the hills between Alcalá and Jimena, now the Alcornocales Natural Park.   He and his comrades were involved in several raids on farmsteads looking for food, which he would pay for dearly later in life.

From there he headed to Málaga, where he joined the Republican army first as a volunteer then, following the fall of that city to the fascists in February 1937, as a member of the 79th Infantry Brigade.  Along with three hundred thousand others, he walked the notorious "Road of Death" to Almería (which was still Republican territory), pursued by Italian tanks, bombed by German aircraft, and shelled by Nationalist ships.  In April 1938 while fighting in Valencia he helped save the life of his fellow alcalaíno Juan Perales León, badly injured after being shot in the face.


Shortly afterwards Miguel was arrested, accused of taking part in armed attacks by Marxist gangs on farmsteads in the hills outside Alcalá, and of defecting to the Republican army because of his Marxist beliefs (the fascists defined everyone on the left as Marxists).  Miguel responded that he fled from Alcalá because his membership of the CNT put his life in danger, and that he had only ever carried the arms issued to him as a member of the Infantry.  Nevertheless he was found guilty of Adhesion to the Rebellion and sentenced to 30 years imprisonment, later commuted to 20 years.

In June 1943 Miguel managed to escape from the penitentiary in Guadalajara, and returned to the Alcalá area.  He joined the maquis, the underground resistance movement, in a group run by Pedro Moya from Casas Viejas (now Benalup):


Miguel Fernández Tizón (Cartucho), between 1945 and 1946, along with two men from Benalup and two from Medina, were in hiding in the La Janda area, living off the land and petty theft when it became too dangerous for their friends and family to help them any more. In summer they stole grain and sold it to black marketeers. One night they were caught in the act, and split up. Two were subsequently shot by the Guardia Civil ... but Miguel, with the aid of the CNT, escaped to Tangiers. (2)

Unlike some other maquis groups, they do not appear to have resorted to kidnapping to obtain funds. (3)

Cartucho's escape to Tangiers in August 1947 was organised by colleagues from the CNT in La Línea and Gibraltar.  He was to go for a swim at a specific place on the beach, where a motor boat would pick him up and take him to the ferry in Gibraltar. Spanish sailors helped him enter Tangiers without being detected.  There he met up with Pedro Moya, who had arrived a few months earlier.  After the two of them were implicated in an armed robbery on a gas station, Miguel was tricked into returning to Spain by the promise of an amnesty.  He was arrested as soon as he set foot on Spanish soil.

Miguel spent many years incarcerated in Madrid and in Valencia, where he learned upholstery and shoe-making.  He sent home shoes for his nieces and nephews, and an armchair for his mother.  He twice appealed against his sentence, on the basis of a Decree issued in 1945 pardoning crimes committed during the Civil War, but his misdemeanours were considered to be outside the scope of the amnesty.

When he was finally released he returned to Cadíz, took up with a widow called Carmen, and worked as an upholsterer in the Teatro Falla.  His friends Alfonso and Juan Perales testified to his military rank, but he never managed to get a service pension. After Carmen's death he went to live with his niece Juana.  He died of diabetes-related conditions, some time after 1988. 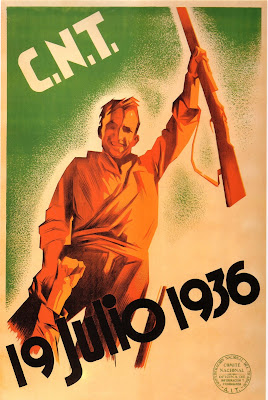 Before July 1936 Francisco Tizón, married with two sons, had been president of the Alcalá branch of the CNT.  When war broke out he fought at the Front and reached the rank of captain.  When the Republican government finally collapsed in 1939, he and half a million others went to France to seek refuge from the inevitable reprisals.  He never returned to his homeland; while working as a bricklayer he fell off a scaffold and died from his injuries.  But he did send letters home:


Here in exile I write to my family with advice to pass on from parents to children. Of all the wars I have known, the Spanish one was the worst because we killed our own brothers, destroyed towns and left cities in ruins. While we were killing each other, when I arrived with the mail [he had worked for the forces’ postal service] they would be having coffee together and arguing about the terrain with toy soldiers which represented ourselves, and while they were drinking coffee, we were killing each other. (1)


The name of José Fernández Tizón is recorded in a book written clandestinely in the vaults of a church in San Fernando, documenting the executions which took place there between July 1936 and May 1940.

On 15 December they took six prisoners from La Cacería, who went in silence to face the firing squad with total submissiveness, such as should characterise them as innocent. Once again the lunatic who took their names didn’t bother to record their age, marital status, profession etc. – nothing, just as if they were dogs. They were executed … (4)

José was one of the six. 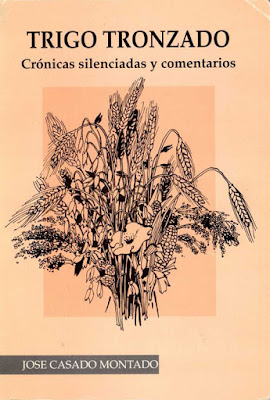 Cristóbal Fernández Tizón was deaf, which prevented him going to the Front, but he acted as cook for the Alcalá men who hid in the hills after the Falangists took over the town.   Once when he was collecting some charcoal to cook with, he was caught by the Civil Guard, tied to a tree and tortured. Fortunately one of them was a relative and he was released, but he spent two years hiding out, sleeping in caves, frightened, hungry and out of contact with his family who had no idea whether he was alive or dead.


His wife earned a living doing laundry for the wealthy.  One of her friends there used to sing about the social revolution promised by the left-wing Popular Front government: "Now we are on our way, now they are going to pay".  For this, she was tortured and had her head shaved.