Last Sunday, 22 May, municipal and regional elections were held across much of Spain.  The right-wing Partido Popular (People's Party or PP)  made sweeping gains across the country, as many people blame the country's economic woes on the Socialist Party (PSOE).  The PSOE are still in power in the national government, but are unlikely to win next year's general election unless some miracle happens in the meantime - the PP have a 10% lead.  Meanwhile, many left-wingers disillusioned with the austerity measures introduced by the PSOE voted instead for the Izquierda Unida (United Left or IU), adding to the PSOE's problems.


Locally, the PSOE (who have held power in Alcala since democracy returned to Spain in the 1980s) have come under increasingly intense criticism for enchufismo (string-pulling) and clannishness, awarding jobs and contracts to their friends and supporters.  A few months ago this came to a head with the removal of an Alcalá man, Gabriel Almagro, from the Diputación de Cádiz (equivalent to the County Council) followed by the resignation of the deputy head of the Junta de Andalucía, Luis Pizarro, in protest.  All is not well in the cuña de socialismo gaditano - but it does look relatively harmless compared to the levels of corruption unearthed in the past few years within the PP, and the smell of sour grapes hangs heavily in the air.

In Alcalá right now though, the air is full of questions. The results announced Sunday night indicated that the PSOE had maintained their majority, albeit reduced, with seven seats, the PP picking up four and the IU two.  However the following morning the scrutineers discovered a counting error, whereby 25 votes meant for the IU had been  wrongly allocated to the PP.  This resulted in a seat being transferred to the IU from the PSOE, leaving them with just six of the thirteen seats.

This leaves the IU in an interesting position. Juan Carlos Fernández Luna, a local schoolteacher and leader of the IU in Alcalá, has called a meeting of affiliates and sympathisers to see if they would be willing to negotiate one of the other parties, but has so far not indicated what type of pact might be considered, or with whom.  Theoretically, if the IU formed a coalition with the PP they could outnumber the PSOE, but ideologically this would be highly controversial and alienate supporters of both parties (Nick Clegg might be able to offer some advice here).

Luna has publicly stated that he wants to take over as the town's Mayor in June - presumably this would be the price of his electoral support for one of the other parties.

The PSOE leader Javier Pizarro said that although in the citizens of Alcalá have given them a wake-up call, the Socialists still picked up more votes here than the other parties, and they would be prepared to govern either with a minority (as they did in the early 1990s) or with a pact with the IU.

April did bring us some spectacular skyscapes to compensate for all the rain.  Thanks to Nicola Chapman for these stunning photographs - we think the clouds are called Altostratus Undulatus. 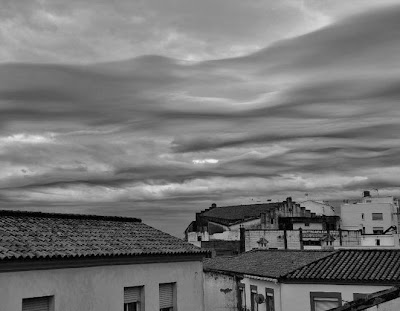 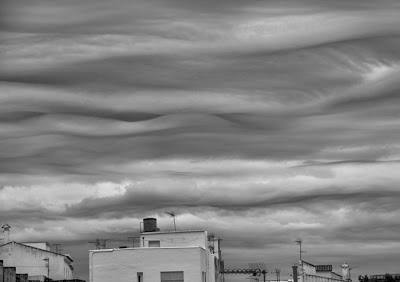 Local TV coverage of the San Jorge shenanigans in Alcalá. 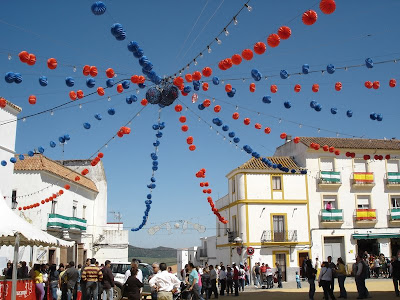 St George, that much-travelled military martyr and dragon-slayer, is the patron saint of Alcalá de los Gazules.  So while those people for whom it is important to demonstrate their Englishness are waving red-and-white flags at football matches and campaigning for a national holiday on 23 April, the alcalainos are celebrating a three-day festival in honour of their patrón.

As well as Alcalá and England, George has patronages in Greece, Portugal, Malta, Georgia, Ethiopia, Moscow and many other places.  The business with the dragon comes from a legend brought back by the Crusaders.  Once upon a time (probably around the 3rd century AD in a place called Silene in Libya) a malevolent dragon was demanding food from the locals.  When they ran out of sheep the dragon ordered children instead, chosen by lottery.  One day the lot fell to the King´s daughter.  George just happened to be riding by and heard her sobs.  He charged the approaching dragon on horseback and stabbed it with his lance, then threw the princess's girdle round its neck and led it meekly back to town.  He promised to slay it if all the townspeople converted to Christianity, which they duly did.

George's fame rapidly spread throughout the Roman Empire and he was made a saint in 494 AD.  He became a popular role model for the Christian Crusaders fighting the Muslim "infidels".  His flag was adopted by the English in 1190, to protect their crusader ships in the Mediterranean (it guaranteed them the protection of the Genoese fleet).

Interestingly, George is also included in early Islamic texts. One Muslim legend recounts that George lived among a group of believers who had been in direct contact with the last disciples of Jesus. George is said to have been a rich merchant who opposed the erection of a statue of Apollo, a pagan deity, by the king of Mosul. After confronting the king, he was tortured many times but to no effect and was imprisoned, later being aided by angels.  To this day, Arabs refer to him as El Khudder - the Green - and believe he can cure madness. 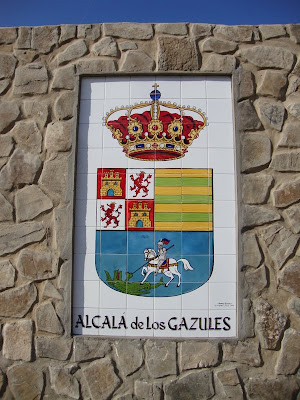 San Jorge pops up all over the town of Alcalá.  The splendid old church in the Plaza Alta is called the Parroquia de San Jorge, and a mounted statue of said saint shares pride of place with Jesus and Mary.  The Plaza Alta is also known as the Plaza San Jorge.  Then there is the hotel, and (until its recent closure) the curiously named St George´s Irish Bar, and of course he appears on the town´s coat of arms.

The Fiesta de San Jorge involves a religious blessing and an outing to carry the statue round the Plaza Alta (weather permitting) followed by three days of non-stop partying.   The square is covered with sand.   Twice a day a young bull or cow is released into the square and taunted by the local testosterone squad, who chase it/are chased by it down the hill, along the Calle Real and into the Alameda.  There is live music, plenty of drinking, and rumour has it that one of the unfortunate animals forms the contents of a large beef stew or caldereta which is served up to the crowds. 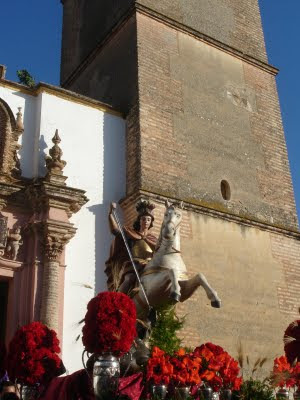 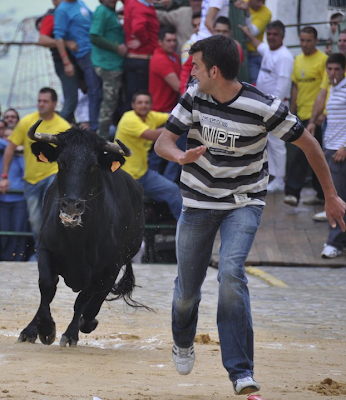 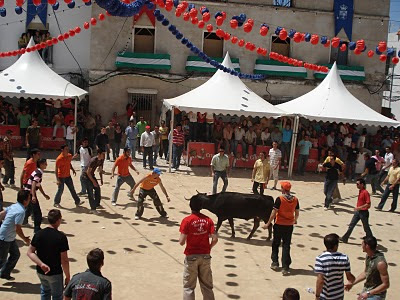 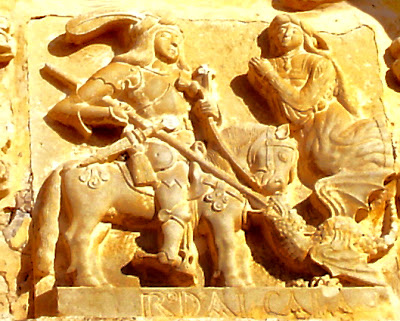