In 2005 Mr L. and I took stock of our lives - early fifties, no kids, good jobs, reasonably well-off, social life on the decline as all our favourite pubs got turned into sports bars - and decided it was time to start planning for an early retirement. Fortuitously, we shared the same dream; to move to somewhere warm, laid-back and beautiful, where we could live a simple and healthy life and enjoy the Great Outdoors.

Spain was the obvious choice; we had been there many times on holiday and could speak a bit of the language. We didn't want to follow the well-trodden path; living in a community of ex-pats on the Costa Geriatrica, sitting round the pool drinking cheap booze, did not appeal. On the other hand, we didn't fall into the Chris Stewart/Driving Over Lemons category either - buying a ruined finca in the mountains and digging your own well sounded a bit too much like hard work. We wanted a nice house that didn't need any work done on it, in a Spanish community, where we could take our holidays until we were ready to retire and live there permanently.

We spent several months researching "property hotspots", watching Place In The Sun-type TV shows, and browsing endlessly through estate agents' listings online. Eventually we plumped for the Costa de la Luz, on the Atlantic coast. It was relatively cheap, relatively wild and relatively easy to get to.

Comparing property prices by the sea with those in the villages, however, it soon became apparent that we could get at least twice as much house for our money a few miles inland. We made a checklist for the house, which looked something like this:
We felt this was important as it helped us clarify what we wanted, and ensured that we wouldn't waste time looking at places that were in great locations but simply not big enough to meet our needs.


We found some likely candidates on the web and arranged a 5-day visit to view them. We thought we would need several more trips but, amazingly, the second house we looked at, in Alcalá de los Gazules, checked all the boxes, and the view over the Alcornocales natural park from the roof terrace clinched it for us. We put an offer in straight away, at the asking price, which was accepted immediately. The house came fully equipped and furnished, saving us the bother of trying to get stuff  delivered when we weren't going to be there. 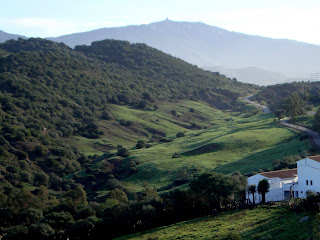 VIEW FROM THE ROOF TERRACE

We deliberated for a while over using a London-based solicitor to handle the conveyancing, or a local Spanish one. However it became apparent that all the books about buying property in Spain are written by English solicitors - and all they seem to do is take your money and employ local Spanish abogados to do the actual conveyancing.  We were savvy enough not to use anyone recommended by the estate agent - too many people have ended up with all sorts of problems that way.  So we Googled "English-speaking abogado Cadiz" and found Juan Manuel, who did a great job for less than half the cost of the London guys.

We thought about renting out the house as a holiday let, but decided that after we had paid tax on the rental income and paid someone locally to greet guests and clean up afterwards, the extra hassle and worry wouldn't be worth the money. Moreover, we wanted to arrive and find the place exactly has we had left it on our last visit.

Two months later we flew over to complete the sale, and knew we had taken the first big step to enjoying the rest of our lives in this beautiful place.