In Spain, as in many Catholic countries, the Christmas nativity scene goes way beyond a stable and a manger. The belén (from the Spanish name for Bethlehem) often recreates in miniature an entire Palestinian village, and examples can be seen in shop windows and public squares as well as schools, businesses, churches and homes.  The custom is thought to be over seven hundred years old, and even has its own name - belenismo.

The little figures are often hand-made, with incredible attention to detail, and there are entire markets dedicated to selling them. We came across one in Seville yesterday: the Feria del Belén is located outside the cathedral and has been going for nearly twenty years.  It  has over 20 stalls selling everything from miniature mechanical blacksmiths, complete with moving hammers (€149), to tiny eggs and vegetables to put in tiny wicker baskets (from €1 each).
. 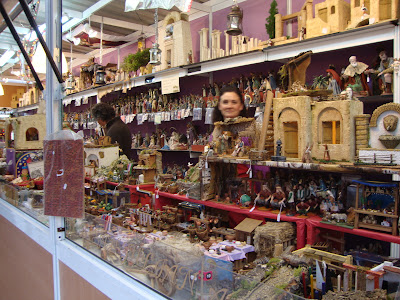 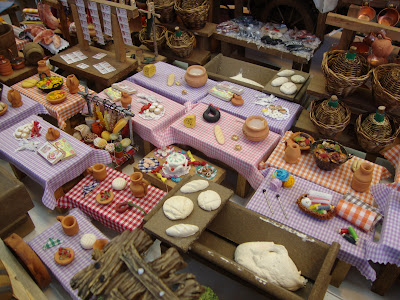 In Catalan regions, every belén will have a caganer or "shitting shepherd" doing his business somewhere in the background.  Nobody is quite sure of his origins, but he has become such a popular figure that he is tolerated by the Church.
As well as static scenes, some towns stage a belén viviente with real people, real animals and even a real baby.  One of the most famous takes place in the historic centre of Arcos de la Frontera, not far from Alcalá, on a Saturday in mid-December (sadly it was cancelled this year because of the weather).  Closer still, the town of Medina Sidonia celebrates its Belén Viviente on the Sunday before Christmas Day.

Alcalá was due to have its first live nativity yesterday, in the Plaza Alta, organised by the Restaurante Territorio Flamenco with live music and other goodies, but I fear it will also have been rained off.  Details of other seasonal events (weather permitting!) can be found here:  Navidad 2012 Alcalá de los Gazules