¿Cómo se llama? (what´s your name?) is one of the first phrases used by most people learning Spanish (after "two beers please" and "Where are the toilets?").  This innocent enquiry does not, however, prepare you for the complexity of the Spanish system of personal nomenclature.

Surnames
The Spanish have two family names or surnames, called apellidos.  A married woman does not take her husband's name, so there is no such thing as a maiden name. A child takes the first apellido of each parent, so the offspring of Mr Pérez Romero and Mrs Rodríguez García will become Pérez Rodríguez.  In 1999 a gender equality law allowed the mother's name to appear first if desired, provided all siblings adopt the same order and it is recorded in the Registro Civil.

With so many very common names, or in small communities, the maternal and paternal apellido can occasionally be the same.  This, combined with the custom of naming the first-born son after the father, can result in names like Fernando Fernández Fernández ("ez" on the end of a name is the equivalent to "son", as in Johnson).

The apellido can be composite, i.e. composed of two or more words, and the paternal and maternal apellidos are then joined by the indefinite article "y", for example José María Álvarez del Manzano y López del Hierro.  In the past the use of "y" was an indicator of social status.  Books by the philosopher Ortega y Gasset were, I realised only quite recently, written by just one person.

Spaniards living outside Spain often hyphenate their two apellidos to avoid confusion, especially when filling in forms where there is just one field allowed for the surname.  Conversely this can cause problems for foreigners living in Spain attempting to submit a form online where there are two mandatory apellido fields.

When addressing someone formally it is normal to use just the first apellido, e.g. Señor Pérez rather than Señor Pérez Romero. Many famous people are known only by their first apellido, for example Rafael Nadal or Penelope Cruz.   If the first apellido is common they might use the second, e.g the former President. José Luis Rodrígez Zapatero was known universally as Zapatero, or ZP for short.  )A wider use of this convention could save many tonnes of newsprint. Our local paper, when reporting a council meeting, is often well into the third column before the names of those present have been listed in full ...)

An illegitimate child whose father is unknown or who is not recognised by his father's family takes both his mother´s names.  Foundlings (a rarity these days thank goodness, but common in less enlightened times) were often named after the place where they were discovered; one of Julio Iglesias' ancestors, for example, would have been found in a church.  Blanco (i.e. blank) and Expósito (exposed) were often used for the second apellido.

Given names
The term "Christian name" is particularly appropriate in Spain as until fairly recently parents had to choose their children's names from a list approved by the Catholic Church.  These days the only restriction is on names which insult the dignity of the child, or are sexually ambiguous.

Most given names, or nombres, have two parts, e.g. Juan Carlos.  The second part is not a "middle name" as in the English convention.  The first part must reflect the child's gender, but the second need not: hence you have girls called María José and boys called José María.

María is by far the most common name for girls.  It often carries a suffix honouring the Virgin Mary in one of her incarnations, such as María del Pilar or María del Carmen.  Informally it is common to lose the first part and just call yourself Pilar or Carmen.  A popular alternative is to use a composite version such as Mariluz (María de la Luz) or Marisol (María de la Soledad).

These days a much wider variety of names can be heard in the school playground.  Lucia, Paula, Daniela, Sara, Carla, Claudia, Sofia, Alba and Irene all featured in the 2010 top ten baby names for girls, with just María at No 3 representing the old guard.  For boys we find a mixture of saints and celebrities, with Daniel, Hugo, Alejandro, Iker, Javier and Sergio jostling for position with the more traditional Pablo and Jorge.

Just as English names have diminutive versions - Bob for Robert, Betty for Elizabeth - Spanish names have their standard variations. Given that there are relatively few names to choose from in the first place, this helps distinguish one Francisco from another.  Another custom is to add "ito" or "cito" (for boys, as in Manolito for Manuel) and "ita" or "cita" (for girls, as in Carmencita).  Some of the most common but less obvious variants are:

Finally there are nicknames (sobrenombres or apodos), which originate from the person's profession, appearance, distinguishing characteristics, dwelling place or some other random factor.  They replace both parts of the registered name and were especially common at times when it was prudent to keep one's identity a secret.  Flamenco artists traditionally use apodos because of their gypsy origins, which were once considered disreputable. Spain's most famous flamenco singer was El Camarón, the shrimp.  The guitarist Tomatito was the son of the red-faced Tomate.

Apodos can be quite uncomplimentary.  Xavi Hernández, one of the country´s leading footballers, is apparently known as Pelopo, referring to his body hair, while his Barcelona team mate Lionel Messi is la Pulga (flea) because of his diminutive size.  Former president José Luis Rodríguez Zapatero is known to all as Bambi.  I can't imagine why ...

When the Fat Man Sings

The Spanish are avid gamblers.  They will bet on anything from backstreet cock-fights to Premier League football, and spend more of their income on betting than almost any other country - around 15%, an average of €480 per person, totalling €1.9 billion a year.  Nothing as trivial as an international financial crisis puts them off.  Maybe it's some sort of Catholic fatalism; it is often observed that Spaniards believe their destiny is shaped by luck rather than by careful planning (although the Germans spend almost as much, which would seem to quash that theory). 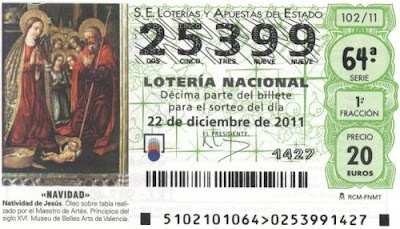 While some forms of gambling are outside the law, the State is in control of the most popular form, the Lotería Nacional. Tickets are sold at face value at official outlets of Loterias y Apuestas del Estado (ours is on the Calle Real), or via street-vendors who get 10% commission.  A recent proposal to privatise part of the operation was abandoned after the government realised that the €7 billion windfall they would have got from the sale would be a poor deal compared to the almost €3 billion a year it brings into the Treasury. You don´t kill a cash-cow like that for a nice bit of steak. 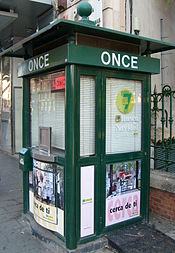 Other lotteries are organised by ONCE, the Spanish organisation for the blind and partially sighted. The ticket is known as a cupón, and there are daily draws as well as scratch cards (Rasca y Gana) for instant gratification. The cupones are sold by sight-impaired or otherwise handicapped vendors, for whom it provides a regular income, either on the street or at official kiosks. If you stop for a copa at any of the bars in Alcalá you will soon see one of the town´s three regular vendors.

But the world´s biggest lottery is the Sorteo de Navidad, known as El Gordo (the fat one).  It is held on 22 December each year, and people sit glued to the TV all morning watching the bolas tumbling from from giant golden cages, and listening to the winning numbers being sung out by the children of the San Ildifonso school in Madrid.

El Gordo was first held on 18 December 1812, in Cádiz. The first prize was 8,000 pesos fuertes and the tickets cost 40 reales. These days, tickets go on sale at the beginning of September and are sold out well before Christmas. They cost €200 and are split into décimos, or tenths. Bars, clubs, places of work, charities and many other groups will buy tickets and sell décimos or even smaller units, adding a small commission for their local Good Cause. We bought our décimo this year at Dominguitos bar for €23, of which €3 goes towards kit for Alcalá´s various junior football clubs.

Seventy percent of the takings (an estimated €3.3 billion) will be paid out in prizes, with around 8% going on administration costs and the rest to the Treasury. This year the top prize will be €4 million, i.e. €400,000 per décimo. There are thousands of smaller prices and the odds of winning something are one in six.


El Gordo has its own website and there are several villages in Spain that regularly sell winning tickets. One is the tiny Pyrenean village of Sort (meaning ‘luck’ in Catalan), where coachloads of hopeful ticket-buyers flock every autumn.

Winning numbers are published in newspapers on 23 December and posted in lottery offices for three months following the draw. Winners must claim their money as they aren’t notified automatically (unclaimed cash goes back to the State). If you win a big prize you can take your ticket to a Spanish bank, which gives you a receipt and collects your winnings on your behalf.

Earlier this year I wrote a post about Quesería El Gazul, which makes delicious cheese and yoghurt from the milk of Alcalá's extensive goat population.   At last week's World Cheese Awards, held at the BBC Good Food Show in the NEC Birmingham, one of Jorge Puerto's gourmet products was judged one of the world's Fifty Best Cheeses.  The competition is the world´s largest, and the shortlist was selected by two hundred international judges who sampled over 2,500 submission from 34 countries.

In all, twelve Spanish cheeses appear in the top 50, compared with eight from England (including last year's winner from the Cornish Blue Cheese Company), eight from Switzerland, six from Italy, six from the USA, and only three from France.  The conventional wisdom that the French make all the best cheeses seems to be up for debate - though they did produce the overall winner, Ossau Irati AOP from Fromagerie Agour.

Alcalá's "Super Oro" prizewinning entry was an organic cheese made from the milk of a special flock of  Payoya goats and branded as "Montes de Alcalá".  The other cheeses produced at El Gazul are made using blended milk from different flocks, so cannot officially carry the label "organic", though they are undoubtedly "free-range".

In all, 28 cheeses from Cádiz Province won awards this year, making artisan cheese production one of the few growth industries in the region. The others came from dairies in Villaluenga and El Bosque, in the northeast of the Sierra de Cádiz.

The Quesería El Gazul has a shop on the Poligono La Palmosa (behind the hotel), open until 2 pm.  To purchase our wonderful cheeses online, visit the website of La Alacena.