Legumbres Pedro - keeping a finger on the pulse

One of the biggest attractions of Alcalá for me is the locally produced food (along with the people, the weather, the scenery, etc etc).  I've already written about our cheeses, retinto beef, vegetables and breads, and am conducting ongoing research into the pork-meat products of Embutidos Gazules (i.e. eating my way through the catalogue) for a future post.  But today it's the turn of the pulses, those protein-packed dried seeds that are a staple of the Mediterranean diet - lentils, chickpeas and beans.

In 1969 Pedro Benítez Barroso founded Legumbres Pedro to package and sell the garbanzos traditionally grown in the area by small farmers. By the 1980s the business had grown to cover growers in the whole of Andalucia, and subsequently expanded into supermarkets, widened its product range to include rice and flour, and started to supply the catering trade via the HORECA distribution channel.

In 2008 Legumbres Pedro moved into its current premises on the Poligono La Palmosa, fully equipped with modern processing and packaging equipment, and started marketing its Alta Selección gourmet range.

These days the pulses come in resealable plastic packs, or pre-cooked in glass jars, but you can still by them the traditional way, by the kilo from hessian sacks in Alcalá's little grocery stores.

Here are some of the products available from Legumbres Pedro, and some recipe ideas for what to do with them.  If you are concerned about unwanted side-effects, read this first!  How To Make Beans Not Make You Fart 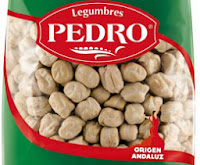 Chickpeas  have been cultivated for at least 7,000 years and were probably introduced to Spain by the Phoenicians.  There are three main varieties of chickpea grown in Spain today:

Blanco lechoso andaluz - pale, large and irregularly shaped, grown in the Andalucian provinces of Cádiz, Córdoba, Sevilla and Huelva.  They have a fine skin and a creamy texture after cooking, ideal for absorbing the flavour of other ingredients.
Castellano - rough-skinned and yellowish, valued for keeping their shape during cooking.
Pedrosillano - small, smooth and caramel-coloured, grown in central Spain.

Legumbres Pedro sell the lechoso and pedrosillano varieties.  They also sell chickpea flour (harina de garbanzo), which is used for shrimp pancakes (tortillitas de camarones).  I use it for onion bhajis (it's the same as the gram flour you get in Indian cuisine).

Every region has its garbanzo-based dishes and around here the most common one is puchero, an economical one-pot stew containing chickpeas and whatever scraps of meat and vegetable are around. Ham bones are often included for flavour, and the broth is ladled off and served as soup for starters. Berza is similar but more substantial, and chickpeas with spinach is very popular.  The Spanish often use pressure cookers to speed up the cooking time and save on gas.

Hummus is not part of the Spanish tradition, but I often make it using garbanzos lechosos.  Here is a version incorporating pimentón (smoked paprika), which adds a distinctly Spanish touch: 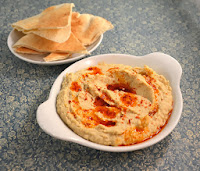 Lentils, whose name comes from the same root as "lens" because of their shape, have been eaten by humans since Neolithic times. They originate from southeast Asia.  They have the highest level of protein of all the legumes except soya beans, and are an important source of fibre, vitamin B1 and iron.  There are three types used in Spain, all sold by Legumbres Pedro:

Lentejas con Chorizo is one of my favourite winter dishes, tasty, cheap and nourishing. 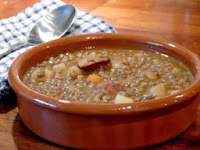 Dried beans come from the pods of green beans.  They come in many different colours and sizes and are eaten all over the world, being an excellent source of cheap protein and nutrients.  They need plenty of pre-soaking and take a long time to cook; a pressure cooker is invaluable.  You can also get them canned (think Heinz!) or in jars.

Legumbres Pedro sell a wide variety of dried beans, including alubias rojas (kidney beans),  alubias carillas (black-eyed peas),.stripey pinto beans, and alubias negras (black beans, cooked with rice to make Cuba's best.known dish, Moros y Cristianos). Most of them are not grown in Spain, but imported from elsewhere and packaged at the Alcalá factory.

The giant white fabada beans (butterbeans), from their Alta Selección range, are deliciously creamy when cooked.  They are perfect for this famous recipe, originally from northern Spain but popular all over the country.  Most supermarkets sell the chorizo, morcilla and panceta (fatty bacon) together in a pack, especially for this dish. 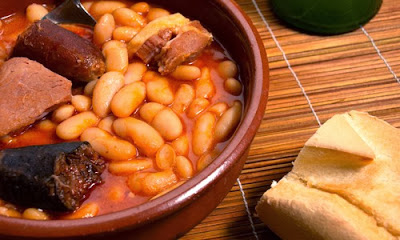 Last night we had the first proper rain since May, clearing the dust from the air and sparking off the growth of lush winter grass which our livestock farmers depend on.  We don't get polite little showers here, it comes down by the bucketful (llueve a cántaros) and soaks you to the skin in  seconds.

Back in May the forecasters were predicting the coldest summer in Spain for 200 years.  Well, if that was a cold summer, bring on some more please.  Daytime temperatures peaked in the low 30s Celsius (90s Fahrenheit) and we didn't get that extended sweaty humid period that usually keeps us awake on August nights.

As always, Alcalainos took full advantage of the summer months to celebrate their fairs and festivals.  Here are some pictures recording the summer of 2013 by a young local photographer, Pedro Martín Sánchez, more of whose excellent work can be seen on his blog Alcalá a través de mi objetivo.


All the fun of the Feria 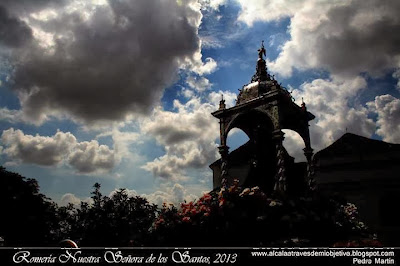 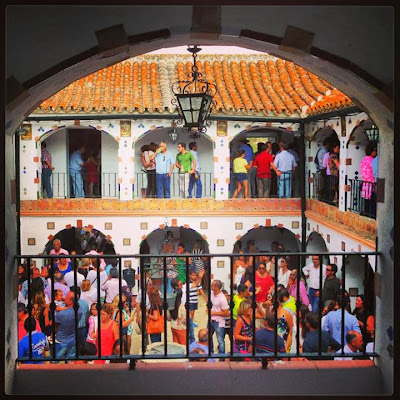 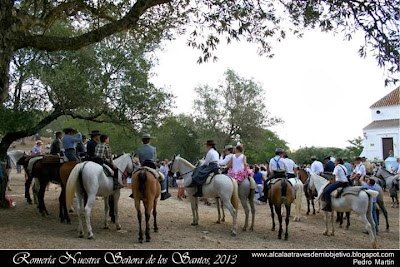 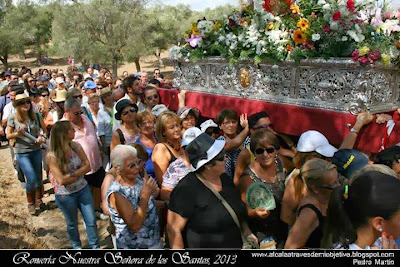 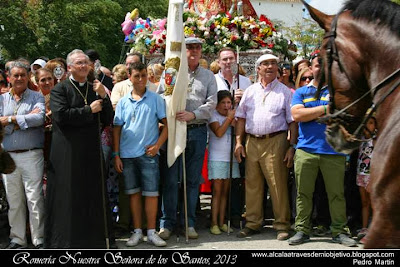