Alcalá's annual music festival takes place slightly earlier this year, with the first event on 31 July.  All events start at 10 p.m. and are free unless otherwise stated.

Tuesday 31 July, in the castle: Family event with story-telling accompanied by classical music. 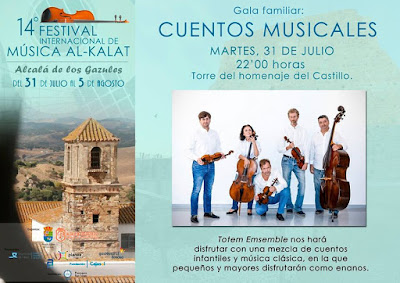 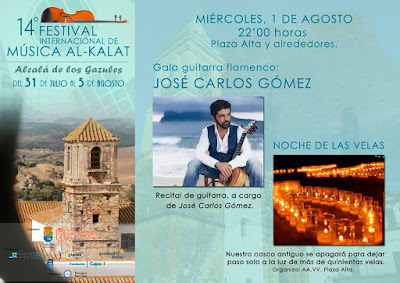 Thursday 2 August in the castle: literary readings from members of the public, with a performance by singer-songwriter Juan Luis Pineda. [NOW IN SAFA PATIO BECAUSE OF THE WIND] 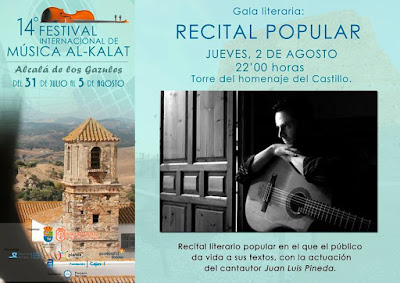 Friday 3 August in the patio of SAFA (off Plaza Alta): Classical/flamenco pianist Dorantes.  Tickets available at the door: €15 seated, €10 standing. 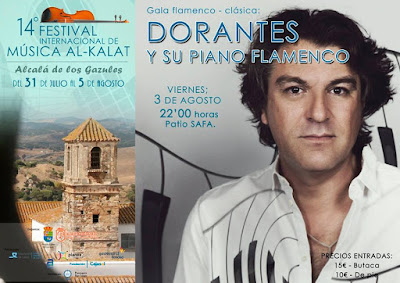 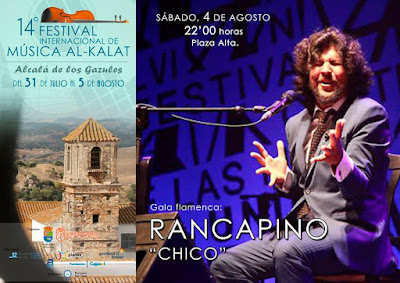 Sunday 5 August, SAFA patio: Classical concert with a 10-piece orchestra from Seville, including Vivaldi's Four Seasons.  Admission €5 on the door. 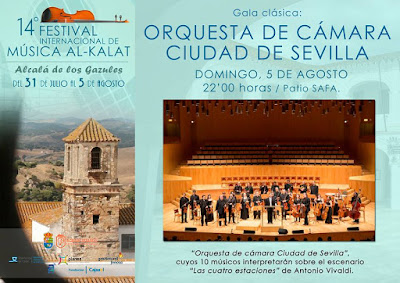 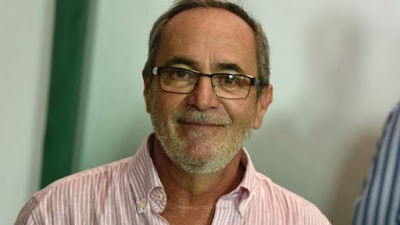 Alcalá is mourning the death on 3 July of historian Carlos Perales, who dedicated his life’s work to to uncovering the truth about events in and around Alcalá during the Civil War and under the Franco dictatorship, long concealed under Spain's Pacto de Olvido (Pact of Forgetting).

Carlos died on 3 July, shortly after falling victim to an aggressive cancer.  He was the brother of one of the leaders of the re-emergence of socialism in the province after Franco’s death, the politician Alfonso Perales (who also died prematurely of cancer, in 2006), and was President of the foundation formed in his brother’s honour. He himself was a life-long socialist, joining the PSOE in 1976 as soon as it became legal again after Franco's death. He leaves a wife, two children and numerous other relatives, many of whom live and work in the town.

Carlos was born in Alcalá in 1958, and studied Modern & Contemporary History at the University of Cádiz.  Until 1999 he taught at the Valcárcel school in Cádiz, formerly an orphanage and hospice, then went on to work in local government at the Diputación de Cádiz. He was reponsible over the years for areas such as education, equal rights, consumer rights and international co-operation. It was there that he pioneered the Historical Memory service, later emulated by other provincial governments.

In 2007 the PSOE government passed the Historical Memory Law to give rights to the victims and their descendants on both sides, including State assistance to exhume victims of repression buried in mass graves.  This gave the green light to local and regional authorities to formalise the work Carlos had already been doing for some years.  As a long-standing member of the PSOE, he became regional coordinator of the Historical and Democratic Memory service for the party across Andalucía.


Carlos was a Councillor in Alcalá from 2007 to 2011, when he set up the citizenship participation scheme and the programme of summer visits by children from Saharaoui refugee camps in North Africa.

A couple of years ago I translated two of Carlos's fascinating and very moving accounts of repression in Alcalá for this blog:

Below are translations of some of the many tributes paid to Carlos Perales in the media over the past few days.

Irene García, Secretary General of the PSOE in the province of Cádiz:


Carlos Perales was always sensitive to the most difficult causes, such as Palestine or the Saharaouis. Long before the current migration phenomenon called for international cooperation, he spent years working with collectives in the Diputación to try to help development in the countries of origin.

Garcia described the intensely detailed work he put in to uncover Historical Memory, even before the law was passed.  “He did it when nobody else believed in it, even when it was a taboo subject and when it was difficult to make institutions realise its importance; he was already working with the testimonies of victims’ families and thanks to his persistence and tenacity, worked with Memory collectives to make an essential contribution to the law passed in Andalucía last year.  This law was the culmination of his work, and a source of great satisfaction for him, because it guaranteed justice to the aspirations of all those who had spent years seeking moral reparations and dignity for the victims.

Even in adversity, Carlos did not give up.  He wasn’t intimidated by his most recent setback, when during the Rajoy government he was denied permission to digitise the records of the military archive in Seville related to victims in the province.


García also emphasised the involvement of Carlos with the stolen babies scandal, when infants were taken from their Republican parents at birth and given to "decent" right-wing Catholics so they could be raised properly:


... he was recently engaged with a mother who was the victim of such an atrocity, and found himself immersed in a delicate search operation for a baby who had supposedly died in the San Carlos Hospital.  With Carlos, you have to remember him like that, fighting and always with a big smile, winning small battles which at the end made him great and special for all of us.

Writer and historian Tano Ramos, who interviewed Carlos in his younger days:


[Carlos was] proud to be a normal person, modest, who tried not to harm anyone, but to help and do good by whatever means he could.  He envied nobody.  He enjoyed listening to “old-fashioned” singers like Joan Manuel Serrat, Silvio Rodriguez and Paco Ibáñez.  He wanted to travel and explore other cultures.  He considered Historical Memory as a social necessity, and was grateful to all the historians who had spent many hours in inhospitable archives digging up documents to discover what happened during the Civil War and the post-war period.  No story should be left covered up, of that he remained convinced.

Carlos grew up during the later years of the Franco dictatorship and he felt the urge to argue with his friends, on a daily basis, in favour of democracy and against fascism  But he wasn’t one to place party discipline or ideology over and above his conscience.  Above all else, he said, is the human condition, which is neither Left nor Right.


In a province like Cádiz, where studies on [the recovery of Historical Memory] arrived curiously late, and where many families are still afraid to tell their stories or reclaim what is theirs by right – that is, that the State return the remains of their loved ones from some mass grave – Maestro Perales threw himself into the fight for Historical Memory which endured till his final moments.  … In spite of his apparent timidity and excessive humility, he achieved in a short time – even in adverse political conditions – a historical memory policy and service that set our province as an example to be followed by other local governments.

For years – interrupted by four years of provincial government by the PP – mass graves have been exhumed, workshops and congresses organised, books and articles published, which resulted in investigations of the history of towns in which formerly nothing was known about what happened after 18 July 1936.

I don’t recall the first time that I worked with him.  But one of the first occasions was a meeting with the CGT union, following which the Todos los Nombres project was set up.  That day was the start of something essential for Historical Memory.

Perales not only put the Administration to the service of Historical Memory – though in a democratic country there shouldn’t be anything extraordinary about this  - but he knew how to bring together new generations of professionals to work on it.  From historians to archaeologists, lawyers, anthropologists and even civil servants, I have seen with my own eyes how people unrelated to the issue became convinced of the struggle that must be continued, each in his or her own field, for the truth, justice and reparation for the victims of the dictatorship.

Maestro Carlos, how proud your uncle would have been of you, the anarcho-syndicalist Juan Perales León, who suffered in the Albareta concentration camp during that last stand against the Francoist troops!  Rest now in peace, knowing that your disciples will continue with the work you began...