Fifteen Alcalá women, who have all been unemployed for some time, have something to celebrate this week. They have been selected to take part in a nine-month training programme on basic restaurant and bar skills, comprising six months' theory followed a further three months' work experience in local businesses. During that time they will receive a grant of €400 a month. At the end of the period they will get a certificate (but no guarantee of a job).

A further 125 Alcalá residents considered "at risk of social exclusion", including some with physical or mental disabilities) will get help from coordinators who will liaise with local businesses to find them placements according to their abilities.

This project, known as CRECE-Empleo, is being funded 80% by the European Social Fund and 20% by the Diputación de Cádiz.   It is part of a further injection of EU funds to help the chronic unemployment situation in Spain.   €16 million was allocated to the Province of Cádiz, which has one of the highest unemployment rates in the country (more than one in three people are out of work). This was distributed amongst the 44 municipalities in the province and Alcalá was awarded €82,169. Province-wide, the project should help nearly 2,000 people, as well as providing temporary work for co-ordinators and trainers.

The training programmes and participants are determined by the Ayuntamientos (town halls), identifying local needs and liaising with the private sector and non-profit organisations. Hospitality training was chosen for Alcalá because of plans to open a new service area next to La Palmosa industrial estate on the A381. This will be run by the hotel and catering group Grupo Abades, who operate a chain of roadside service stations across the country. There is no information yet on when this will open, though they appear to have started levelling the land.

Some might question whether taxpayers' money should be spent on providing local businesses with unpaid labour in their bars and kitchens (what will happen to their existing staff, most of whom aren't on secure contracts?) or subsidising the training costs of profitable national chains. But for these fifteen women, desperately hoping for a decent future, this opportunity has to be a step in the right direction.
Labels: economy, politics, tourism 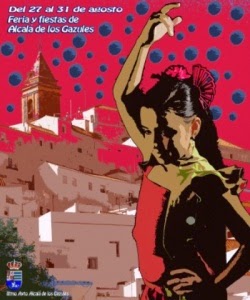 Alcalá's August fair is one of the highlights of the festive calendar, with friends and families getting together for four days of eating, drinking, loud music, dancing and general merriment.   But it wasn't always like that and it wasn't always in August.

Francisco Teodoro Sánchez Vera, an alcalaíno now living in Catalonia, describes the ferias he remembers from his childhood.

During the years of my childhood and adolescence in Alcalá, there was no fair in August. It was celebrated in May, and it was very different to nowadays. In those days the girls didn't wear dresses with frills, and you didn't hear sevillanas1 on the Paseo de la Playa. We had song and dance del gazpacho2 to the rhythm of verdiales or pasodobles, played by local groups with well-known musicians like my friend Jésus Sánchez, father of the great Alejandro Sanz.3 There were also flamenco shows in the Cinema Gazul, alternating with movies starring Miguel Ligero,4  the Lone Ranger or Fu Manchu. In later years, these spectacles took place in the more comfortable and luxurious Cine Andalucía.

In the mornings the fair kicked off in the Prado, from the Venta de Teneria to the mill of Manuel de la Jara. In this space, which stretched from the hill of la Salada [now C/ Nuestra Señora de los Santos] to the bridge over the Rio Barbate, livestock farmers, brokers, and a significant number of alcalaínos of all ages mingled with the numerous outsiders who came looking for business, along with hundreds of horses, cattle and goats. There wasn't much organisation; it looked more like a great improvised camp site than a market which had been legally constituted more than a century earlier.  At that time it was a livestock fair, very prestigious and long-established. The buying and selling of animals worked very well, many deals were done, and people moved from one group to another, curious to eavesdrop on the bargaining process, which always ended with a handshake.

In the afternoon and evening, the focus moved to the Alameda and the Paseo de la Playa, and towards the Monte Ortega (the site of the current fairground). The feria was about wine and aniseed liquor, churros5 and candied pine-nuts, cones of shrimp and crab-meat, slices of coconut or fudge, and other forms of sweet pastries. There would be a circus in the Hoyo6 and bullfighting in the wooden bullring at the Jaras' mill. Hundreds of people would come into the town from the countryside, dressed in their best clothes. You saw the beautiful girls with their long glossy plaits and their demure, healthy appearance. For some, the fair was the only time in the whole year when they came down from the Sierra to the town. 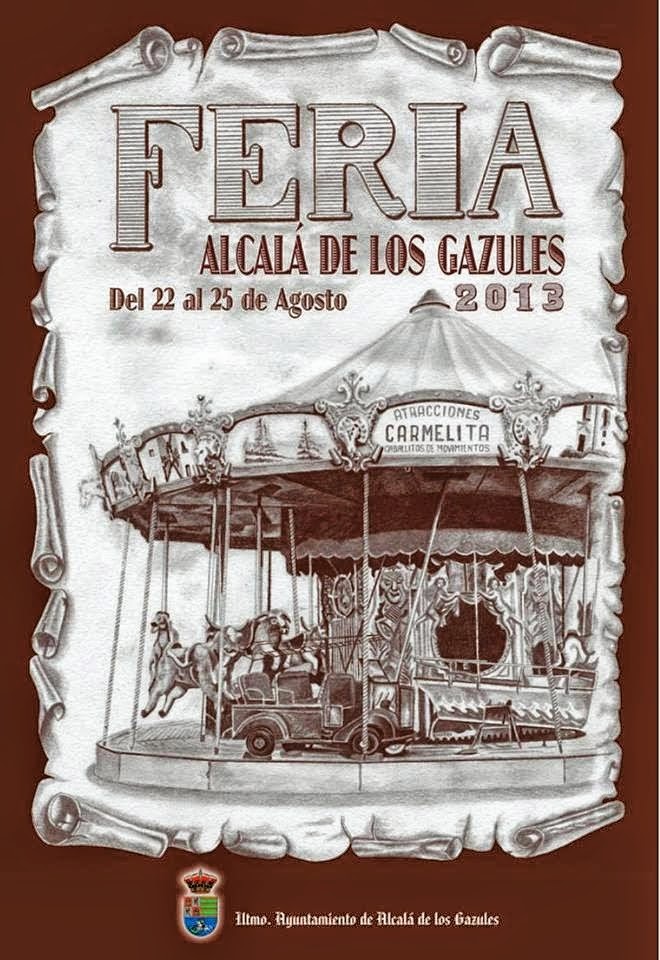 When Alcalá was tragically depopulated in a short space of time, with its patios left half empty and its chozas7 abandoned, the animals who helped men with their labours in the field were no longer necessary. During this period [the 1960s], more than half of its men and women left the town. What remained is what is there today, because our town has, unfortunately, prospered little in the past fifty years, and what little prosperity there is, has been the knock-on effect of progress in the rest of Spain. The towns which surround us – Benalup-Casas Viejas, Paterna, Medina and Los Barrios - have all grown in population and commercial activity, in a very noticeable way. Alcalá remained dormant and continues so - due, or so I believe, to its inability to heal the tremendous wound which it suffered in its belly, a wound much deeper than in the surrounding towns, given that those places lost far fewer of their inhabitants. They did not lose as much young and vital blood as we did, and therefore have prospered much more.

With the fields empty and without the need for animals, celebrating the May fair no longer made sense. It deteriorated rapidly, and then disappeared completely. Various attempts were made to hold it on different dates, but it never found its ideal slot, for one reason or another. Today it has indeed found its place, coinciding with the holiday period of many alcalaínos who live far away, and it sits comfortably within the calendar of local festivities.

The modern fairs have lost their original function as a commercial event, and have been converted into a festive occasion, a gathering of social relations, organised for the enjoyment of the local people. Our town today has a fine fairground, in which groups of friends and families have places where they can meet up and have a whole year's worth of fun in a single week. Most of the women dress up in trajes de gitana8. They look splendid and are eager to dance sevillanas, or enjoy a glass of beer or rebujito9 with their tapas of ham or the magnificent local goat's cheese. They fill the streets and the fairground marquees with a spectacular range of colours and joyfulness.

The women are the same, the men are the same, but nevertheless the atmosphere of the Alcalá fair has changed. It is very different from the other towns in the region, a unique, generous pueblo, whose busy public spaces leave no-one indifferent, given that we have a Playa with no sea, and an Alameda with no poplars.10

1. Sevillana – a sociable, joyful folk dance in 6/8 time, seen at fairs and festivals right across Spain. It is usually performed in pairs, and involves a lot of twirling and raising your arms above your head. Tourists visitng Andalucía often mistake it for flamenco dancing; the style was influenced by flamenco in the 19th century but its roots are much older, derived from Castilian seguidillas.

2. Baile del gazpacho is an informal folk dance event, a bit like a ceilidh, Documents from 1839 record it taking place in Alcalá de los Gazules. The dances are performed by up to twelve pairs, accompanied by singing, clapping and guitar music. Verdiales and pasodobles are flamenco dance rhythms.

3. An internationally famous pop star whose family came from Alcalá.

4. A film star from Argentina.

6. An excavated piece of ground, behind Pizarro's restaurant where the municipal park is now.

8. Gypsy-style flamenco dresses, skin-tight to the knees then flaring into elaborate frills, usually in brightly-coloured fabrics. Flowers and combs in the hair, shawls and enormous earrings complete the outfit.

10. The original meaning of Alameda was an open space surrounded by poplar trees (álamos).