April is the cruellest month

I'm not sure quite what T.S. Eliot had in mind when he wrote that, but it certainly applies to Alcalá de los Gazules this year. What is normally one of the most pleasant months weather-wise has been almost a complete washout. We have had the odd fine day, sandwiched between five-day stretches of Levante, a vicious east wind that rattles the house and coats everything in fine pink dust, and torrential rains that have tested our new storm-drains to the limit. And to top it all it´s been several degrees colder than usual, while Northern Europe has been basking in warm sunshine!

But to the devout Catholics of Alcalá, April´s cruellest blow was the heavy rain which caused the cancellation of the processions on Thursday and Friday of Holy Week, or Semana Santa. 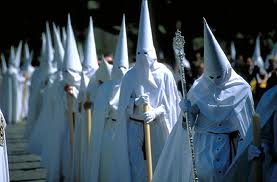 The week leading up to Easter is the most important period in the Spanish religious calendar. All over the country there are services and street processions organised by local cofradias, or brotherhoods.  Sometimes the processions are silent, lit by thousands of candles; sometimes they are accompanied by a solemn band.  Some of the biggest attract hundreds of thousands of people, like the one in Seville.  The faithful carry heavy platforms or tronos on their backs, bearing images of the Virgin, covered with flowers and candles, or of Christ on the Cross.  Some followers are on their knees, others flagellate themselves to enhance their penitence.  Many wear capirotes, capes and tall pointed hoods to disguise their identity, a custom later adopted by the Ku Klux Klan in the Southern United States.   It´s all a bit overpowering and strange to an atheist like myself.

Wednesday´s silent procession did take place here in Alcalá, but unfortunately it clashed with Real Madrid playing Barcelona in the final of Copa del Rey.  There were rumblings of disapproval in the brotherhood about the number of men watching the match in the bars instead of joining in the procession, and following Madrid´s victory (another cruel blow!) their supporters definitely did not observe a reverent silence.

The Fiesta de San Jorge, postponed from last weekend because St George's Day fell on Easter Saturday this year, starts tomorrow.  Alcalá's patron saint is due to be paraded round the streets on his white horse, followed by three days of merriment on the Plaza Alta, complete with bulls running through the streets.   And the weather forecast?  You've guessed it - yellow alert for heavy rains and thunderstorms over the next three days ...

Some images of Semana Santa in Alcalá from previous years: 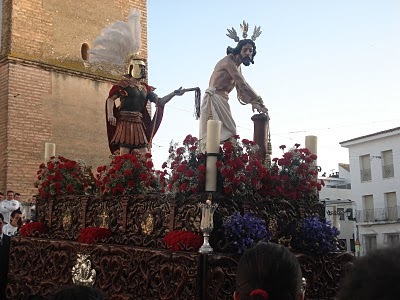 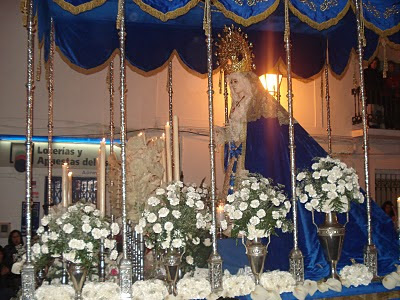 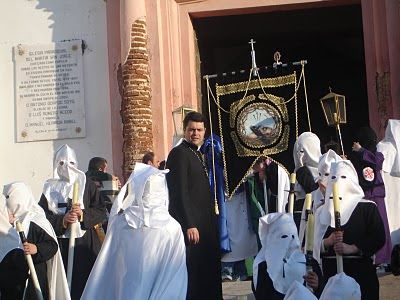 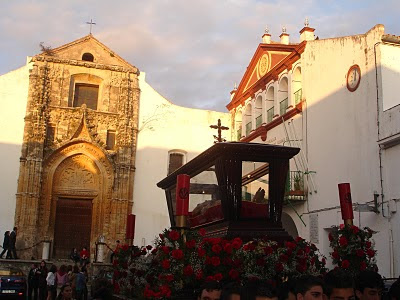 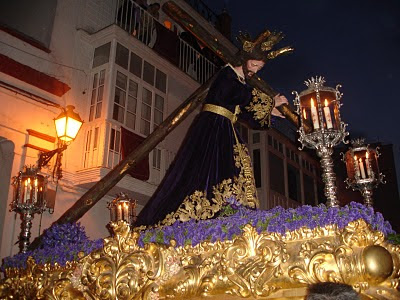 This was taken from my balcony a few minutes ago.  it's been cold and wet here for several days, while Northern Europe is basking in warm sunshine - but every cloud has a silver lining.  Just before taking this, a flock of white egrets flew under the rainbow. 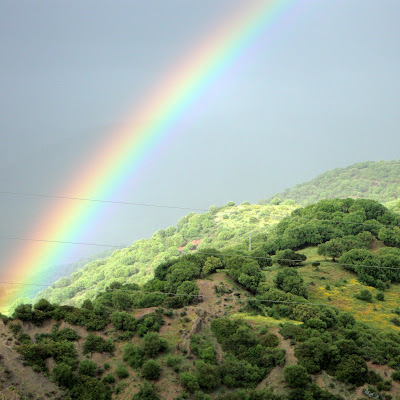 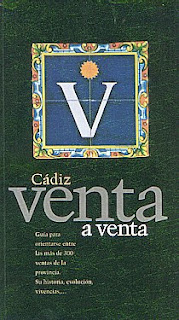 On every country road in the Province of Cádiz you will see buildings bearing signs saying "Venta", usually with a few 4-by-4s and assorted farm vehicles parked outside.  The dictionary definition of venta is a sale, from the verb vender, to sell.  I had to search for some time to find this secondary definition: "A poor inn on roads far from towns or villages".
The ventas of Andalucía date from the times when most of the seasonal work on the land was done by itinerant labour.  Some enterprising housewife saw a business opportunity and set up shop to provide cheap, filling meals for them, the idea caught on and to this day they provide good value food for farmers, manual labourers, hunters and the odd tourists who have strayed off the beaten track in search of "the real Spain".
Ventas are also found along major highways and are used by lorry drivers and other travellers  - the equivalent to transport cafés in Britain.   They are somewhere in between between a roadside pub and a restaurant, unpretentious, and usually run by the families that own them - somewhat anachronistic in the day of the Little Chef and the Happy Eater.

Breakfast is served from very early in the morning until midday, and usually consists of coffee (with or without brandy), tostada (toasted rolls) with chopped tomato, garlic and olive oil.  A savoury alternative is paté or fouagra (the Spanish pronunciation of foie gras).  Bright orange manteca colorá, pork dripping flavoured with red pepper, is also popular and delicious on toast.


If you ask for butter, you will probably be given a tub of margarine - believe me, olive oil is much nicer.  If you want jam, ask for mermalada; if you want marmalade, tough.  They don't eat it here!  But there is usually a selection of sticky cakes, and occasionally churros, doughnut twists,  made for dipping into thick hot chocolate.


Most customers sit at the counter to eat their breakfast, dropping litter on the floor around them;  this is quite normal, but if it puts you off there is usually a dining room you can adjourn to.  Since the ban on smoking in public places came into effect last January, the atmosphere is a lot more wholesome.


Lunch is usually served between 2 and 4 pm.  There is almost always a fixed-price menú del día, three courses and a drink for seven or eight euros, but you may have to ask for it and it might be presented in spoken rather than written form, since it changes every day.  Some places don´t offer a menú del día at the weekend.  The starter is often more substantial than the main course, especially the thick vegetable stew known as berza, or garbanzos con acelgas (chickpeas and chard).

To see the main menu, ask for la carta.  There will usually be a choice of home-cooked stews, casseroles and grills, and ventas are the best place to sample locally-sourced game such as rabbit, venison, jabalí ( wild boar), or pheasant and partridge when they are in season, at very reasonable prices.  Unless you are near the coast, you are unlikely to get a wide range of fish or seafood but there is usually pescado en salsa (some sort of white fish in tomato sauce). 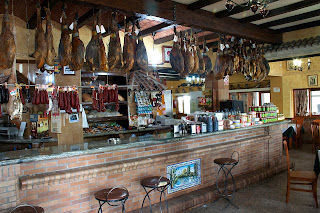 Some ventas are closed in the evenings, others stay open and serve evening meals too.   Some remain very rustic, with two or three big scrubbed tables which you sit round on benches. Others, like La Duquesa near Medina Sidonia, have gone upmarket and would probably turn you away if you turned up in your working clothes with cow-dung on your boots.  Some have shops attached, where you can buy wine, cheeses, frozen game, or olive oil in bulk.  Many will have hams and chorizos hanging from the ceiling around the bar - another reason to be grateful for the smoking ban.


Sundays are traditionally when Spanish families get together for a long lunch, and the ventas have become the preferred venue for many;  half the price of conventional restaurants, and nobody has to do the cooking or washing up.  It´s a good idea to arrive well before 2 pm  if you want to eat on a Sunday. 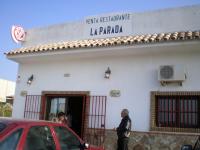 There are a number of ventas around Alcalá.  In walking distance is La Parada, on the Poligono la Palmosa (not to be confused  with the restaurant called La Parada in the town centre).  It is dwarfed by two coach-party stopover places, La Querencia and Los Corzos, but is a bona fide venta.   The Venta Patrite, near the campsite, is about 5 km from the centre of Alcalá.


A few miles northwest of the town, towards Paterna de Ribera, is  the Venta La Liebre, small and friendly and a great place to try Alcalá specialities.  There is another venta on the way to the Santuario, Venta La Ermita, popular with pilgrims paying their respects to Nuestra Señora.

A little further afield, on the road towards Ubrique, the Venta del Puerto de Galis is in a spectacular location and popular with bikers, hikers and hunters.  In days gone by this was a famous meeting point for smugglers; literally an inland "port".  The wild boar in sauce, jabalí en salsa, is to die for.   Don´t drink too much though as the road back gets even more tortuous after a couple of beers.

There is certainly no shortage of small children in our town and the new Guardería "La Miga", which was opened last week, will accommodate 120 of them.  It was funded by the national government and local authorities at a cost of €826,000, and there is no charge to parents.  The nursery is located in the Barriada de San Antonio, near the Juan Armario primary school, on the west side of the town.

The grass (a rare sight here) is apparently "antistatic and anti-allergic"!