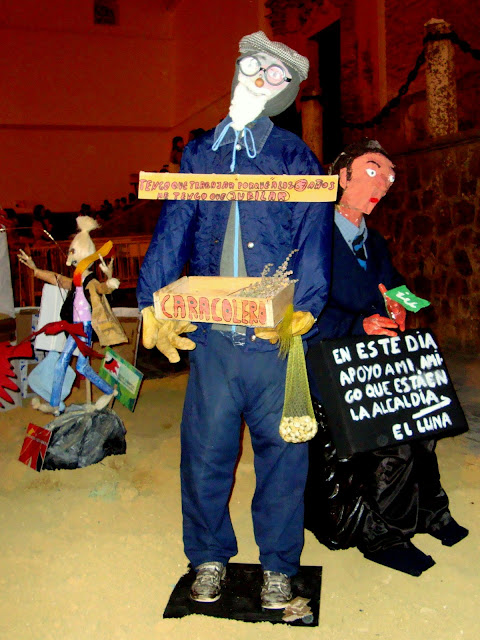 Old guy: "I  have to work [selling snails] because at 67 I have to retire" - a reference to the recent raising of the retirement age. If you don't have a job to start with you have to wait two more years to get a regular income.  The chap in the chair is the new IU deputy mayor, Juan-Carlos Luna (whose campaign ticket was that the former mayor only helped his friends): his sign says "These days I am supporting my friend - the Mayor". 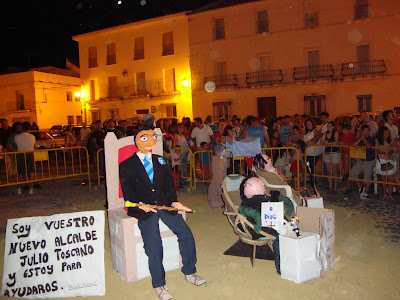 On the left is the new PP Mayor, Julio Toscano, with his bastón de mando (baton of command);  whoever has this, runs the town.  "I am your new mayor and I am going to help you".  On the right is the local parish priest, who has just got a new job in Rome.  "A Dios" - to God. 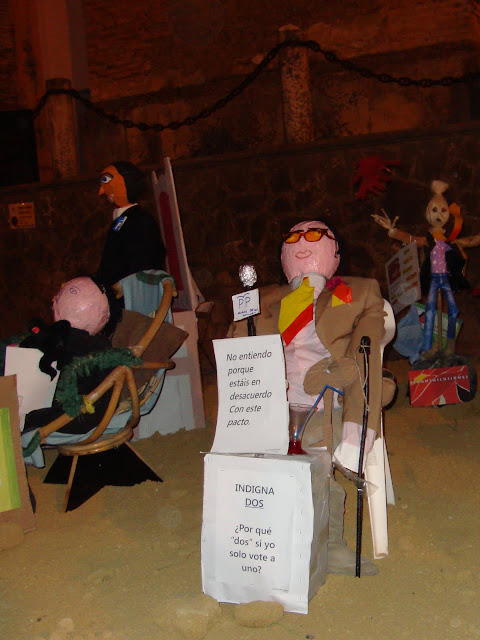 Toscano again:  "I don´t understand why you you are all against this new pact."
"Indigna-dos - why two when I only voted for one?"  A pun on indignados, the indignant ones, the name given to the pro-democracy protest movement sweeping across Spain.  The Alcalainos are indignant because they voted for one party and ended up with a coalition.

Up in flames with the lot of you!
Labels: festivals, politics

San Juan - time to set the night on fire! 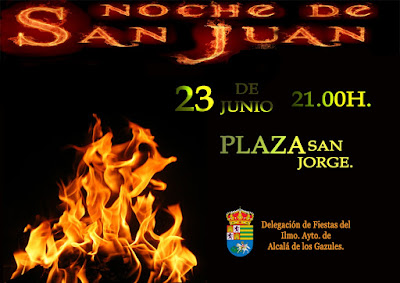 The feast-day of St John the Baptist coincides with the Summer Solstice (23-24 June) and like many other festivals in Catholic countries, St John's Eve ( la Noche de San Juan), the shortest night of the year, combines elements of both the Christian and pagan traditions - all involving fire.

St John's Eve is celebrated all round the world, not only in Catholic countries like Brazil and Ireland, but also in Scandinavia and the Shetland Islands.  All over Spain bonfires are built on the beaches or in town squares, and are attended by huge numbers of people all set to party the night away.  According to tradition, if you jump over a bonfire three times on San Juan's night, you will be cleansed and purified, and your problems burned away.  On the beaches, this is followed by running into the sea to wash away evil spirits.  While doing this, you make three wishes for prosperity during the next twelve months.

In Spain San Juan marks the official start of summer and is traditionally the first day for families to visit the beach (nicely coinciding with the start of the school holidays).  In and around Alcalá it also marks the end of the snail-eating season, since snails harvested after this date will not have fed on juicy fresh grass.

The bonfires are also used to burn muñecos or effigies - think Guy Fawkes. This quema de juanillos is usually done around midnight. Originally the effigies were supposed to represent Judas Iscariot, but these days the festival provides an opportunity to incinerate politicians, local businessmen, TV personalities and anything else you would like to see the back of.  There will be no shortage of options in Alcalá this year, that´s for sure ...

Alcalá has a new Mayor 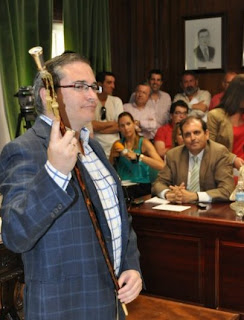 At a packed meeting in the town hall yesterday, the leader of the right-wing Partido Popular, Julio Toscano (left), was elected Alcalde (Mayor) for four years.  His deputy will be Juan Carlos Fernández Luna, leader of the Izquierda Unida (United Left).

The PSOE, roughly equivalent to the Labour Party in the UK, had been in power in Alcalá for 32 years.  For the last eight, the role of Alcalde was held by Arsenio Cordero, who now has to hand over the reins and return to his teaching job.

This outcome, sufficiently surprising in the "cradle of Andalucian socialism" to have made the national newspapers, was enabled by a controversial pact between the PP and the IU, who picked up  four and three councillors respectively in the recent elections.  The incumbent PSOE only picked up six seats on the council, losing their overall majority - by just eleven votes - on 22 May.


Luna, a teacher, and Toscano, a doctor, will continue with their existing jobs instead of becoming full-time employees of the Ayuntamiento charged with the day to day running the town, as usually happens.  Instead there will be four new employees, two from the PP and two from the IU, to undertake this role.   Nobody is quite sure yet how this will work, but the Mayor has a huge amount of power in Spanish local government, being responsible for hiring and firing all the council employees as well as signing contracts with third parties.

The word on the street is that the IU offered to form a pact with the PSOE, but only if they appointed Luna as Alcalde, which Cordero was having none of.  So, much to the disgust of many of the people who voted for them, they have jumped into bed with their ideological opposites.  A "pact of hate", it is being called, implying that their mutual desire to oust the PSOE is stronger than their opposition to each other.

Their first joint action will be to audit the town's accounts, which have apparently not been published for eight years.  The IU will then have a chance to unearth evidence of the enchufismo or favouritism that they have been complaining about for years, and the PP can review the public expenditure programme before making the massive spending cuts they have promised.


Given that the IU nationally have guaranteed never to pact with the PP, it is quite possible that the Alcalá team will be disciplined or even expelled from the party.

Thanks to Chemary Gómez Reyes for the photos
Labels: politics

Years ago before I had any thoughts of moving to Spain I saw a TV programme about the White Villages of Andalucia.   Sparkling white cubes with terracotta roofs clinging to hills topped by castles, narrow cobbled streets opening into picturesque little squares, populated by little old ladies dressed in black and little old men riding little old donkeys ...  it looked like a film set. In those days my ideal holiday was slobbing on the beach getting a tan and catching up on my reading, but the programme really captured my imagination and I wanted to go and see for myself.  I certainly never imagined I would end up living in one.


Many of these towns have the suffix "de la Frontera", indicating that they were on the old frontier between the Moorish and Christian-controlled territories - hence the large number of watch-towers, castles and other fortifications found in the area.

Alcalá is not an official pueblo blanco, in the sense that it doesn't feature in the Ruta de de los Pueblos Blancos and therefore doesn't get the corresponding tourist grant.  Rumour has it that permission was denied because of the ugly four-storey building at the end of the Calle Real.  But to all intents and purposes it is - the buildings are all painted white and have been since time immemorial.

This involves, as you can imagine, a lot of whitewash, or cal.  Over the winter the mild, damp conditions are perfect for the growth of mould (green, black, orange - take your pick) and it is a spring ritual to go round the house with a bucket of diluted bleach and a scrubbing brush to get rid of it all before you can start painting.   (The spores of black mould can be toxic, by the way - you should never scrub it off dry, always wet it with diluted bleach and leave it for a couple of hours to kill the spores off before removing it.)

I've just started work on painting the roof terrace, having waited several days for the wind to drop sufficiently to be able to wield a brush without it blowing everywhere.  Even so there is nearly as much paint on me as there is on the wall ...

White painted buildings reflect heat and this helps keep the interior cool, or so theory goes, though the flat roofs are usually painted oxblood red, which sort of has the opposite effect.